Our next “private” adventure took us to the home of Lord William Northrop Macmillan, an adventurer and American citizen who was so successful in Kenya that he was knighted, in spite of being American. Born in Scotland and brought up in St. Louis, Missouri, Macmillan was one of three or four settlers (like Lord Delamere and Lord Egerton) who were influential in bringing agricultural science to Kenya, establishing agriculture as one of the country’s major economies (if not the major economy).

I had wanted to visit the house ever since I first visited the near-by Ol Donyo Sabuk National Park. I had heard about the Macmillan home, and somehow (don’t ask how) got the idea that it would be something like Egerton Castle, full of romantic stories and fascinating colonial lore. 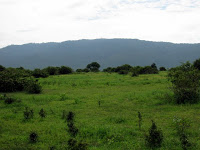 That was not the be the case. It is a spacious, grand edifice from the period (Lord Macmillan’s dates are 1872-1925), but it had obviously fallen into a great state of disrepair. So when we arrived, after an adventurous journey from the Thika area, trying to locate the place and seeing all sorts of interesting scenery along the way, we discovered that the house and lands now belonged to the Kenya government and would eventually be a tourist site and house museum. Unfortunately, the work is progressing very slowly, and the gate and the wall barred out entry.

Once again, thanks to the splendid skills of supreme negotiator Charles, the supervisor for the project was brought to the gate and we were able to go in, with the supervisor himself guiding us for our visit.

And what a tour it was! Lord Macmillan had arrived about 1901 or so, planning to spend his time in big-game hunting (and enjoying it to such an extent that ten years later U.S. President Theodore Roosevelt came to join him in some of his expeditions). He also, as I’ve noted, got very involved in the agricultural pursuits then being put forward but his success was – to put it mildly from some of what I’ve been told – extremely limited. In fact, Lord Macmillan is remembered as something of a dreamer and one who engaged in any number of unsuccessful initiatives but he is nevertheless remembered fondly in the area.

And the man himself. Apparently Lord Macmillan was a man of considerable girth (one commentator told us he weighed over 400 pounds!), and you hear about that often when Lord Macmillan’s name comes up, with the story even following him into the grave. It’s told that when he died, having expressed the desire to be buried at the summit of Ol Donyo Sabuk, the tractor pulling the coffin up the mountain couldn’t make it. So Lord Macmillan is buried – along with his wife and one of the servants – about half-way up the mountain (see my earlier post about Ol Donyo Sabuk, with more photos, including the gravesite).

As for the house, of course it is still undergoing serious re-construction (go here to see the photos of our visit) but even in this state, it was worth the journey, especially being able to experience the curious lack of sophistication in finding ourselves in a not-tourist-ready situation. The supervisor who showed us about was full of interesting stories, and while we were at the place, we discovered that the home had been the location of a prisoner-of-war camp during World War II (as were apparently other sites in Kenya – see below). There is a memorial plaque honoring the Italian nobleman who was in charge of the camp (I couldn’t quite figure out whether he was one of the prisoners or an Italian nobleman working for the Allies), and we were told about (but didn’t attempt to enter) tunnels lead from the house to the outbuildings, to permit safe escape for the officers if necessary.

The house is beautifully situated, and as the re-construction and planning operations progress, we are told that not only will the fields facing the house be converted into a grand parking lot for all the visitors, there will be a cable car going back and forth to the summit of Ol Donyo Sabuk, so that the treacherous drive (which Charles and Nerisa and I can attest to, from our visit up the mountain) can be avoided.

It will be fun to return when all the plans have materialized (but I’m afraid I’m put in mind of Lord Macmillan’s own dreams and schemes – I just hope this time it all works).

Skepticism aside, the entire adventure at Lord Macmillan’s home was great fun, complemented with gorgeous viewings of the famous flame trees (a la The Flame Trees of Thika, the popular book by Elspeth Huxley and later film). They truly are exceptional, and while we had seen them in many different places in the Thika area, their arrangement at the Macmillan House site was special, as I’ve tried to show in the photographs.

And one more thought, totally unrelated (except in connection with Italian prisoners-of-war kept in Kenya during World War II): Over in another part of Kenya, on the mountain road between Nairobi and Nakuru, there is a little jewel of a chapel. I passed it frequently while I lived in Kenya, and finally stopped recently to go inside, and there are a couple of photographs attached to this story of the prisoners at Lord Macmillan’s place. There’s no other connection, I think, but this is a good place to show the little chapel. Very sweet, seating only 12 people, and apparently a nice place for a little spiritual refreshment as travellers go up or come down the mountain road overlooking the Great Rift Valley.