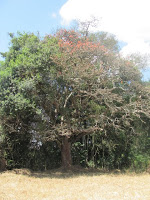 Not too far from Thika (of The Flame Trees of… fame), there’s a lovely mountain park that I did not really have on my list, but as I had not spent much time in the Thika area, why not? That’s what Saturdays in Kenya are for, right?

It was a beautiful drive to Thika, once we got away from the construction on the new Thika highway (the Chinese are doing the Kenyans a big favor with all the road construction they’re sponsoring, but it sure does make a mess – and tie up traffic, even on week-ends!).

The park itself is named for the great mountain in its midst, the Masai word for “big mountain.” The Kikuku tribe calls the mountain (and the park) Kilima Mbogo, their word for the African buffalo, and one can understand why they gave it the name. The park is famous for the buffalo, often found in great numbers in the park, and we had heard many stories about the many African buffalo we would see there, in great herds.

That was not to be our experience, alas. For some reason, the buffalo were in hiding, and we did not see a single one! Our guide opined that it was because we were there in the middle of the day, and it was – unusual for us but apparently not so unusual for this part of the country – very hot. 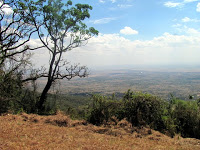 So while we were not going to get to see the buffalo (and not a big deal, really, as we’ve seen plenty of them in other places), we were going to see some magnificent scenery. We feasted our eyes and shot many photographs simply because, like when we were at the Menengei Crater, there’s just so much to see and the vistas are so spectacular. In fact, if I were in charge of tourism for the Ol Donyo Sabuk National Park, I would just skip over the buffalo stuff and go straight to the scenery. You can see some of our photographs here.

The park has quite a history, too. For one thing, the country’s more recent history is represented near here as the home of the country’s first President – Jomo Kenyatta – is nearby. We didn’t get a chance to visit, but apparently the Kenyans often stop by to pay homage. Also nearby is the birthplace of Tom Mboya, born in the area in 1930. One of Kenya’s most important politicians, Mobya’s career was cut short with his dreadful assassination in 1969.

The colorful history of the area goes back even further. Part of the wicked Happy Valley (ahem!) activities took place in the surrounding countryside but an even more important legacy is the contribution of Lord William Northrop Macmillan (1872-1925). Despite the title, he was an American, from St. Louis. He came to Kenya for big-game hunting (even hosting Theodore Roosevelt for a hunting excursion or two) and stayed on to become a major philanthropist for the country. Like Lord Egerton, Lord Macmillan had much to do with the establishment of Kenya’s agricultural economy, and he and his wife – both buried on the mountain – are warmly remembered by the people of the area.