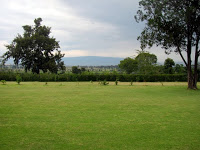 And now it’s time to give some thought to Lord Egerton.

Have been fascinated with expatriate life in Kenya, from the turn of the last century up to (and sometimes including) World War II, I greatly enjoy reading about the personalities involved. And yes, I’ve read (twice) James Fox’s good history of the infamous Happy Valley crowd, White Mischief, and I highly recommend it. The early days of the country’s colonial history are pretty gripping, and just about anything you find about what went on in those days, from the commercial exploitation to establishing the government, is well worth reading.

The other favorite book on the subject is Karen Blixen’s Out of Africa, and both the book and the film are now classics. Blixen’s home outside of Nairobi is good excursion for anyone interested in the expatriate life (or simply interested in how a fine writer lived at one point in her life). It’s in a town called “Karen.” I’ve heard both that the town was named in her honor and that it’s simply a coincidence that both she and the town share the name,  but I’ve never checked it out, since how the town got its name really isn’t part of the story. (I wrote about my visit to the house here.)

Now I’ve become intrigued with Lord Maurice Egerton, the elegant gentleman farmer who is generally given credit for bringing agricultural science to Kenya, and for developing agriculture as a business, leading to its role now as the country’s primary economic resources. He established a training school (“a farm school”) for agricultural science in 1939, and it became the now-famous Egerton University, known internationally for its excellence in the study of agricultural science (and, incidentally, as the site of a knowledge management course integrated into the Agriculture Information and Communication Management  curriculum).

Egerton, 4th and last Baron Egerton of Tatton, was well known as an innovator and, according to one account, “a man of great inventive and technical skill.” He was an early aviator, photographer, and filmmaker and in addition to his work in agriculture, Egerton achieved a considerable reputation as an early motorist.

When he came to Kenya to set up his work, he acquired huge land holdings, much of which at his death in 1958 became the grounds of Egerton University. Additionally, though, Lord Egerton build a rather fabulous home on his estate, and my friends and I recently had a splendid visit to “Egerton Castle,” as the house is now known.

Used by the university for ceremonial events, the house, now empty, is lovingly cared for by Robert Onyiego, 76, who came to work at the house when it was being built (his parents were working there as well). Onyiego eventually worked his way up to being deputy engineer for the construction of the house, which went on over a period of several years. [Photographs of our visit are here and include snaps of Mr. Guy and Nerisa and Charles and even of Mr. Onyiego himself, who was extremely gracious in leading us about.] 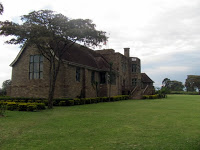 Built for a lady to whom Baron Egerton wished to become engaged, the house is something of an anachronism. As it happened, the lady refused him, not once but twice, and Egerton’s heart was broken . He lived the remainder of his life totally without women in his life, even to the point of excluding them from the grounds of the estate. The story is well told by Beatrice Obwocha here in an amusing – and sad – version. It will stretch your imagination and make you wonder about how some of these people came to think the way they did.

My favorite part of the story – not surprising to anyone who knows me (and not much emphasized in the Egerton legend) – is the Baron’s great love of music. One great end of the mansion was his music room (the huge room shown in the photographs). The remains of the great organ for which he brought famous musicians to Egerton Caster is still in place, and the story is told that – even when there were guests – Lord Egerton loved to sit in one of the window alcoves with the heavy draperies closed, to listen to the music in his own solitude. It is a spectacular room, and obviously was the setting for great entertainment in Lord Egerton’s day.