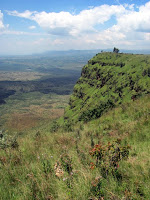 One of the most spectacular sites in Kenya happens to be not too far from Nairobi, about two hours’ drive up toward the Rift Valley.

I had seen another spectacular view (well, there have been many, really) on a safari in this direction, when Charles drove me to the Hell’s Gate National Park and we descended into the famous Gorge and then, upon coming up again, climbed up to some very splendid views. [That safari is described here and here.]

The Menengei Crater is something else again. We had not really planned this excursion, but as I was giving speech that day at an international conference at Egerton University, near Nakuru, and since my presentation and the reception following were finished by noon, Charles and Nerisa and I decided to do some exploring. Beside, we wanted a preview, because as Charles continues with his tour guiding (and since fellow Americans are going to give his business a jump-start when we come for a three-week safari in December), the Menengei Crater was being considered as a likely spot to visit.

Were we impressed? Absolutely. See for yourself (Menengei Crater near Nakuru). The photographs show off the beauty of the place, and it is at times I wish I were more skilled as a photographer, but I think enough shows through to give an idea of the spectacle of the Menengei Crater. I’m already looking forward to returning there with my friends in December.