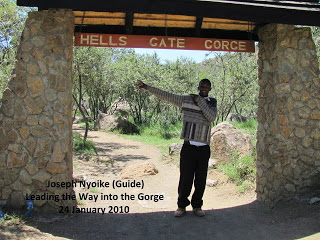 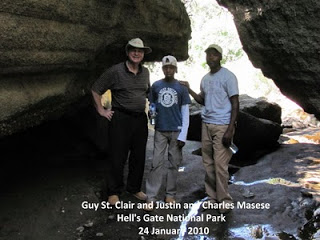 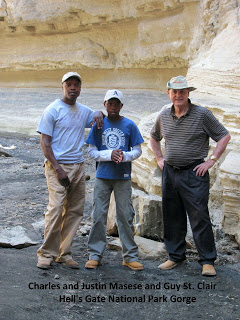 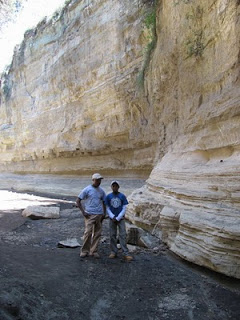 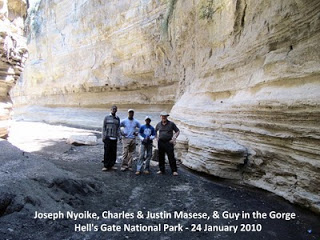 Perhaps I give the impression that I spend all my time in Kenya going on
safari but the tardiness of this post will clarify that. I am in Nairobi to
work, and despite the pleasures of the occasional safari or other excursion
(usually on week-ends), I do have a job to go to. So the posts do not necessarily coincide with the date of the event (hence
the 24 January 2010 date on these photographs). Sorry about that!What to say about Hell’s Gate? My driver and I decided to have a safari
there, not so much to see the animals (although there are plenty of animals
in the park). I had heard about the spectacular scenery, and we’ll have
those photos in the next post. And while I had not heard much about the rock
climbing that’s required if you want to see the gorge, well, I was up to it
(surprising even myself!).There’s just so much to say about Hell’s Gate and I won’t be able to do our
safari justice, so I’ll start with the climb. As with my other safaris, I
chose to go alone, although this time I decided to invite Charles’s
13-year-old son (who had later come with us to the Maasai Ostrich Farm, also
described here and also out of sequence). My usual practice is not to bring
a guide from Nairobi – which can be done – but to hire a guide at the park,
and this time we really lucked out. Joseph Nyoike turned out to be one of
the most knowledgeable – and one of the funniest – young men I’ve met since
I’ve been in Kenya. The personality comes through in his introduction to the
gorge. It was obvious this man was going to see that we had a good time.The gorge itself is spectacular, as I hope the photos show. The climb? That’s a different story (and it is pretty “spectacular” as an
adventure, I will say). And despite my continual protestations that “70 is
the new 50” these three – having discovered that I have a big birthday
coming up – decided to be very protective of their “older” pal. So I was not
allowed to take any chances as I climbed down into (and back up from) the
river gorge. As you can see, it’s pretty deep, and while there were plenty
of places where I had to step carefully and the fall would have been pretty
disastrous, I was well protected. There were continually three young me
below me having me put my foot on this one’s shoulder or my hand around this
one’s neck. They weren’t taking any chances.So down we went and – yes – I was a little taken aback by the rather large
sign posted at the spot where we would start our descent: “Be Aware of Flash
Floods.” Fortunately, it was dry enough that we didn’t have any flash floods
and in fact we weren’t in any danger. Joseph told us that if there had been
major rainfall up-river, we would not have been allowed to go down into the
gorge. Even so, you can see from the riverbed that a rush of water coming
down the gorge would not have been fun.It was a spectacular adventure, and I really enjoyed myself. Water seeps out
of the rock at all levels. Hell’s Gate is – as one guidebook describes it –
“the most overtly volcanic of Kenyan landscapes” and that is clearly evident
from the heat of the water coming out. Beautifully, pristine and clear, the
water is so hot it is often steaming. And sometimes too hot to touch but
when it can be dipped into, it makes for an amazingly refreshing wash-up.Our climb lasted about four hours, with the climb back out topped up by
incredibly gorgeous views and – thank goodness we were all in good shape –
about a four-mile walk back to the carpark. Hot, dusty, thirsty (although we
had taken plenty of water with us), we still didn’t want to leave but our
time in Hell’s Gate had to come to an end.