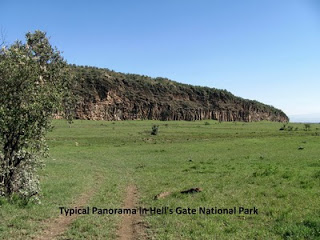 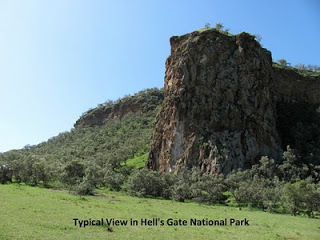 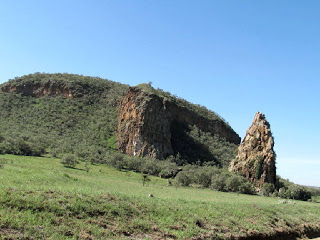 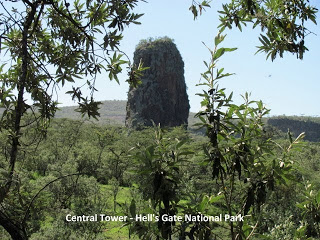 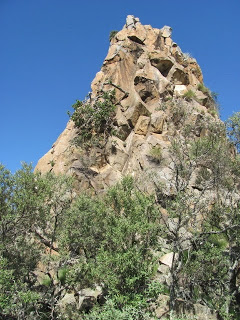 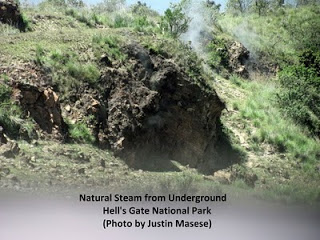 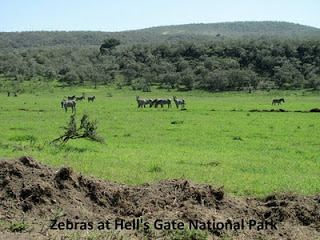 And then there’s the scenery. As I noted last time, describing a safari to
this magnificent park can’t be done in just one post, so please forgive this
“extra” posting. Just wanted to be sure this splendid place was given its
due. Being a dormant volcano, the rocks are spectacular, and the obsidian rock –
found all over the Rift Valley really – is truly spectacular here, and my
friends and I loved picking it up, holding it up to the sunlight and
enjoying its beauty. It’s very much like the old fashioned “jet” jewelry
ladies used to wear (maybe that’s where the jewelry comes from?) and it is a
beautiful stone, very glassy and associated with lava flows that cooled too
quickly for crystallization. And, sadly, there are no photos of the
obsidian, since the pictures I took didn’t turn out. Sorry.The views, I hope, will more than make up for that. The entrance to the park
is very lovely, as the panorama pictures show. These are very typical
scenes, and when I spoke about the similarity of this experience to my visit
to Yosemite last April, I wasn’t really referring to the height of the
mountains – they are nothing alike. It’s just that at both Hell’s Gate
National Park in Kenya and at Yosemite National Park in America, there is a
spectacular feeling to being out in nature among all this beauty. Hard to believe, for some of us city dwellers. Just hope I never lose my
appreciate of it.Fischer’s Rock – the most spectacular of the volcanic “plugs” – is quite a
sight. One of the early 19th-century explorers, Fischer was apparently one
of the people who contributed much to the volume of learning about the
volcanic region in those days. The other conspicuous volcanic plug is known
as Central Tower, and it, too, can be seen from just about anywhere in the
park.The other amazing fact about Hell’s Gate National Park is the presence of
the steam under the earth, and how it is used. The Ol Koria Geothermal Power
Station produces 15-25% of the country’s electrical power (I wish we got a
little bit more of it in Nairobi when the power goes off, as it does too
often!). But in all seriousness, I was not only surprised but a little
overwhelmed to see how this huge public-private operation can take place
right in the park with very little disruption of the beauty of the place.
May it always remain so.There are still places where steam escapes from the rock formations –
including one nicely photographed by Justin Masese, whom we’ve now delegated
our “official photographer” and to whom we refer as “Mister Justin” – he
loves it! And there’s even steam escaping from the hills behind the zebras
in that photograph. Not much, but you can see it if you look carefully.And that’s a good segue into speaking about the wildlife. There is plenty of
it in Hell’s Gate National Park, but – as I noted – most people come for the
scenery. We saw quite a few zebras, wonderful giraffes (including a splendid
giraffe family walking along in formation as they do, with mom in the front,
followed by junior, with dad bringing up the rear. Splendid.