In October, when I wrote about the Met’s new production of The Gershwin’s Porgy and Bess, I was pretty sure I would be writing about it again. There was more I wanted to say about this important New York event, and now that it is into its second set of performances this season, this seems like a good time for a few additional thoughts.

In that October 17th essay (Porgy and Bess – A Monumental New Look at an American Classic), I made reference to the opera’s very special music. I noted that I had earlier attended a discussion – one of the company’s “METtalks” – and I later found myself coming up with a few slightly different ideas about how I might think about the opera and its music and how they relate. It began to be a little more clear to me and I began to better grasp one plot point included in the opera, its “purpose,” you might say. The final great piece of the opera “Oh, Lawd, I’m on my Way” is more than an aria, for it melds Porgy’s solo aria into a splendid chorus. In it, Porgy sings of his decision to follow Bess, for he has just learned that she was lured away by Sportin’ Life to go to live the “high life” in New York. Immediately, without thinking about it, Porgy is determined to follow, to find Bess. 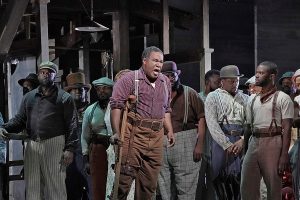 But hold on. From a logistical point of view, the idea seems sort of problematic, since anyone looking at or listening to this poor, crippled man would not be able to believe that he could get to New York, much less figure out how to get to Bess. But that’s not the point. What it is, what came out in the discussion of the piece (led at this point, if I remember correctly, by Eric Owens) was that Porgy wasn’t singing about whether he would get to New York. The song is about his faith, his undying love for Bess, and the fact that, in his own mind, he would get to her. It was a song about his faith in himself. And, as the song moved forward and the chorus took it up as a great anthem, it became almost spiritual:

And that kind of faith in one’s self, as indicated both in Bess as she flees Crown and in Porgy as he sets out to be on his own “way,” is a theme that seems to run through the music. Usually, of course (and that would be expected based on the religions of the countries in which opera was born and thrived over the centuries), it has to do with religious faith.

In some cases, though, I think it has as much to do with a more “spiritual-but-not-necessarily-religious” faith, what we might call a faith-driven direction, regardless of what kind of “faith” is calling the character (or person) forward. Porgy, of course, has the fundamental religious faith practiced in his own ethnic community in early 20th century Charleston. But as written in this music, it is equally – or perhaps even more so – based on his own faith in himself, even if he is not able to recognize it. We know, and we accept, that he can’t articulate it except in religious terms he already knows, such as equating being with Bess with being in a “heavenly Lan’”. But it’s not nearly that sophisticated. He simply wants to get to Bess.

Other such “faith-driven” music is – certainly throughout history – religious. Or comes from a religious background or connection. I’m thinking of one of the great hymns of the Anglican/American Episcopal Church, Ora Labora (usually translated as “Come, Labor On” although the title really means “pray and work”). It was written by T. Tertius Noble (1867-1953), the organist at St. Thomas’s Church, New York who established the world-famous choir school and boys’ choir at St. Thomas’s. Also well known as a composer, Noble in this hymn, in its lyrics, (and certainly in its soaring musical line) moves the message forward with a direction that can only be sung as taking the singer “on my way.”

But all music we might refer to as “faith-driven” or inspirational is perhaps not necessarily religious. Could it not just be thought about as something “sort of” spiritual? Could it not, perhaps, come simply from a “spiritual” faith, a faith in one’s self, or in what one is seeking to achieve? Moving back into the opera world and our love of the art form, what about something like all those heavenly creatures and the music they sing in Boito’s “Mefistofele”? Clearly the opera gives the impression – and does so throughout most of the score – that the hymns are all praising God. But wait! Don’t some of those messages refer to Faust’s moving “forward,” especially as we get to the final scene of the opera? That, it seems to me, is certainly “spiritual” but it is – at this point in the story – not necessarily religious. The pact agreed upon earlier has now been undone, and religious salvation is now a given. Hasn’t Faust been “saved”?  So isn’t his moving “forward” simply spiritual and not altogether religious?

Going even further, what about the famous inspirational conclusion of Mahler’s Symphony No. 2 in C minor (“Resurrection”). The title leads the listener to think about that great, almost bombastic conclusion as connected with some spectacular religious experience. Again, though, the musical inspiration is more spiritual and not automatically religious. Despite a tendency of some orchestra managers to schedule performances of the work during the Easter season, it was not intended by Mahler to be such. The symphony doesn’t have anything to do with Christian Easter. It is, as Richard Freed wrote in the program for a Kennedy Center performance of the Symphony No. 2 by the National Symphony Orchestra, an “extension of, or sequel to, the personal narrative represented in his First Symphony. … a more personal, and yet hardly less universal, concept of ‘resurrection’ that Mahler undertook to convey in this music, characteristic of his own vision of human aspiration and idealism which informs so many of his works….”

So we have, if we like, strong things to think about when we get enthusiastic about the Met’s new production of The Gershwin’s Porgy and Bess. There are a few more performances (we’re all hoping the opera will come back into the Met’s repertory before too long), and the Met has just announced three additional performances, on February 4, 12, and 15. The previously scheduled matinee is on Saturday, February 1 at 1pm, as part of the company’s ongoing international radio broadcasts. It will also be telecast in the company’s Live in HD series, shown in cinemas throughout the world (with – it’s said – some 350,000 people watching at once), with a repeat showing as a filmed “encore” on the following Saturday, February 8. And to please us even more, the company’s new DVD of the production is now available at the Met Opera Shop.

So what’s happening? Is this perhaps the season of Porgy and Bess in New York? Will we – sometime in the future – find ourselves thinking of the Met’s 2019-2020 season that way? It certainly looks like it, doesn’t it?