[Special thanks to Kevin Manion for his generous assistance with this post.]

Since you are reading what is generally referred to as “Guy’s personal blog,” it makes a certain kind of sense to say, once again, how we New Yorkers seem to have a special appreciation for what is available to us. Why? Because we find ourselves surrounded by beautiful things, material objects that practically call for appreciation, as I’ve just said. And as a long-time resident, I’m happy to share that in all the years I’ve lived in New York, I’ve been known to say repeatedly that my two favorite museums are the one we’ve always called The Cloisters (now referred to as “The Met Cloisters,” in recognition of the museum’s role as part of the Metropolitan Museum of Art) and The Frick Collection. The latter, since the mid-1930s, has been housed – along with the Frick Art Reference Library – at the Henry Clay Frick House on Fifth Avenue between 70th and 71st Streets. While that remarkable landmark building (designed by Thomas Hastings of Carrère and Hastings) is being renovated, the Frick Collection’s hard-working curatorial staff has done a great job of moving many of the works of art into a temporary location. Called Frick Madison, the building is the famous Marcel Breuer-designed former home of the Whitney Museum of American Art and for a while for The Met Breuer. The building is at 945 Madison Avenue and 75th Street. For those of us who have long admired the splendid traditional displays of The Frick Collection in the setting of a palatial private mansion, it’s now become a special treat to go into Frick Madison and wander about enjoying  these much-loved works of art in this spectacular Modernist setting (yes, that’s the term I often hear associated with Marcel Breuer – “Brutalist” is sometimes heard, too). I find I’m not at all put off by seeing the art works in this environment (very different from how they’re usually seen). In fact one of the most special thrills I’ve ever had with viewing art took place at Frick Madison about a year ago (and I’ve returned often since). 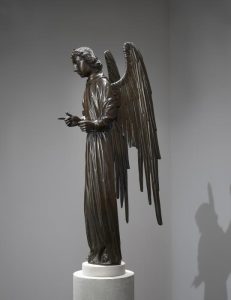 Back in July 2021, a group of us had our first visit to Frick Madison, and we started on the upper floors. As we were coming down, the elevator door opened on the second floor to reveal what was possibly one of the most beautiful works of sculpture I’ve ever seen, the almost unbelievable angel made by Jehan Barbet (d. 1514). As I’ve visited this work since that first visit, I’ve come to appreciate it even more, and while I don’t think of myself as a professional art scholar (by any stretch of the imagination!), I find the pleasure I have in standing near this work of art and looking at it very satisfying. 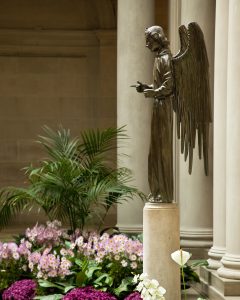 Part of my interest might come from the sort of “new” attention I’m now able to give the statue. At the Henry Clay Frick House, Barbet’s Angel was displayed on the side of the mansion’s splendid Garden Court, and while it was no less beautiful there, it was – I suspect – pretty much overlooked amongst its grand surroundings. That is not the case at Frick Madison. In the Breuer building, as the elevator door opens and the visitor steps out, the view of Barbet’s Angel is almost heart-stopping. We don’t expect it, and all of a sudden it comes to us that this tall, splendid youth-like figure is – as it should be – almost ethereal in its stance on its column. Celestial, yes – it represents an angel after all. But the impression it gives off is more than that. There’s a sublime, almost intangible aura about it and the viewer suddenly realizes that he’s looking at a figure that seems shaped like a long tube, a thin, elegantly formed physique (not “physical” of course) that is definitely only similar to a human figure, an artist’s interpretation based – as artists must do – on what we all know of the human figure. And that’s as it should be. As we learn more about the history of Barbet’s Angel, we find that it was cast by a maker of cannons and while it is definitely meant to look like the designer’s own impression of an angel, its shape certainly implies that it was cast by someone who was working in a foundry. Two things come to us from that fact. First of all, one scholar (Giulio Dalvit, noted below) comments that the Angel is possibly the only monumental fifteenth-century French bronze sculpture in existence, “as most large French metalwork from that period was melted down during the French Revolution and the Napoleonic Wars.” So now we’re feeling even more privileged to be able to spend time with Barbet’s masterpiece. And that idea leads to a second: Xavier F. Salomon (also referenced below) points out that Barbet (known as “Jean Barbet” in late 15th-century documents, and referred to as the Cannonnier du Roi, the “cannon maker of the king”) was the person who made – who cast – the statue. But he was possibly (probably) not the designer of the angel. At that time, it was the maker of the sculpture who signed the piece, and the designer’s name was not on it, so the work is credited (and signed, as noted below) by the person who cast the sculpture.

Many things about Barbet’s Angel stand out. One observation a friend and I made on a recent visit was about the making of the angel, that the wings are very thin, demonstrating for us Barbet’s very strong talent to be able to mold an object like a feather so thinly (indeed, Salomon comments that “the texture of those feathers is extraordinary”). Salomon also make clear that the beauty and elegance of the angel’s wings (the other two parts of the three-part sculpture) are very delicate and special, and each of the wings is attached by a bracket or a hinge. The inside of the left wing includes an original inscription which – again thanks to Salomon and his description – details that the “little angel” (“angelette”) was made on March 27, 1475 which, in that year, happened to be Easter Monday. Of course we don’t know if there is any specific connection between the making of the Angel and Easter Monday, but it doesn’t really matter, does it? It is a pleasing coincidence, if that’s what it is. I also had some thoughts about the band around the angel’s head, and especially the decoration at the front of the band. In his discussion, Salomon refers to the band as a “diadem,” which certainly makes sense but we couldn’t help but wonder about – even though this statue was made in France – the decoration at the front of the band. Had it been made in England, we could refer to the ornament as a Tudor rose or something like that. But as I don’t know what a comparable decoration in this date in France might have been, I can’t give it a name. As for some of the other specifics about the sculpture, we noted that the facial expression is calm and serene, perhaps with a slight sense of concern, and we wondered if the look on the face of the Angel might be connected with whatever object (now gone) he might have originally been holding in his other hand. Also, unlike as in so many artworks, the fingers are not elongated, and the hand that is not pointing appears to be closed as if it had been holding a spear or a tall object of some sort. Certainly that was the assumption in some earlier times (as in the nineteenth century, for example), when it was thought that the Angel had originally held a cross. As for the pointing finger, we had some fun with that. In our recent visit, as my friend and I were talking about the Angel (and as I was dictating my notes into my iPhone), a museum staff member walked up and at our invitation joined our conversation. When we wondered about the pointing finger, he laughed and told us that the staff sometimes offers suggestions among themselves. “Such as?” we asked. “Oh, like, ‘Not so loud,’ or ‘No pictures,’ or ‘Don’t get too close.” That reaction – from people who probably look at the statue every day – gave us a laugh. 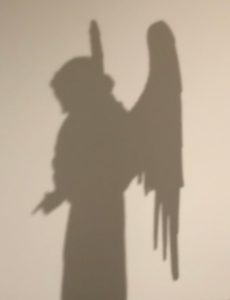 More seriously, it so happened that – on that particular visit – the light surrounding Barbet’s Angel at that particular time of day cast a very sweet shadow. I knew I was not supposed to take a photograph (the other photos used here were found online). But, well, the shadow was off to itself, and it seemed to send me some kind of message. I’m not sure what it was, but I think it had to do with all this particular piece of sculpture had seen over the years since 1475, of what had taken place in so many societies, countries, and civilizations over those many years, and – like the statue of the little angel – the shadow spoke to me. I went away a happier person. A little sad, perhaps, but also very happy. So take my word for it. Give yourself some time to go to Frick Madison and enjoy all the art (all of it extremely worth visiting, no matter where you come from). And, whatever you do, find some peace and joy with Barbet’s Angel. All the issues we’re dealing with on an almost daily basis will move aside a little, and you’ll come away invigorated, liking yourself a lot more for spending some time with the Angel. [A useful description of what’s happening with sculpture at Frick Madison is “Sculpture in a New Light: Celebrating a World-Class Collection” by Giulio Dalvit, Assistant Curator of Sculpture, in The Frick Collection – The Members’ Magazine (21, 1, Winter/Spring 2021). Additionally, in one of my favorite discussions about the sculpture, Xavier F. Salomon, Peter Jay Sharp Chief Curator describes Barbet’s Angel in beautiful detail, both historical and as a remarkable work of art. This program was one of the Frick Collection’s “Cocktails with a Curator” series, posted on May 19, 2020. It is available on YouTube (https://bit.ly/3tRw4e6).]

Share your thoughts. Submit your comments below, in “Leave a Reply,” or send directly to: guystclair@smr-knowledge.com. Unless you prefer otherwise, when received your comment will be published with the post. Thank you.

Guy St. Clair is a writer and editor living in New York City. In his blog, Sharing Guy’s Journey, Guy writes about any subject that crosses his mind (some friends refer to the blog as “Guy’s online journal”).  In his professional life, Guy is the Series Editor for Knowledge Services, from academic publisher De Gruyter Saur in Munich and Berlin.