Labor Day, 2018. In America, we are celebrating one of our national holidays today. With Labor Day, the attention often focuses more on the “holiday” side of the observance, because the day also marks the unofficial end of summer. Despite that, our Labor Day does have a serious purpose, as it was established as a day in which we Americans honor the labor movement so prominent in American history and, in particular, how workers have contributed to the nation’s strength and success.

While there is a separate holiday in America to honor veterans, that doesn’t come until November 11. Originally known as Armistice Day, the holiday marks the anniversary of the end of the First World War. This year is a particularly special observance as 2018 marks the centennial of that event. Over the years, as memories of the World War I have faded, the holiday has evolved to be a recognition of the contributions of American veterans, and in 1954 Armistice Day was changed to Veterans Day. 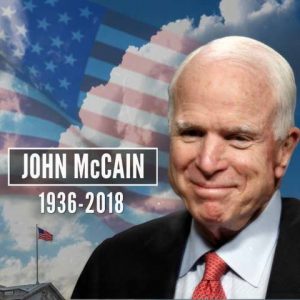 This year, Labor Day and Veterans Day seem almost to have combined, since much attention this past week-end was given to Senator and war hero John McCain, who died on August 25. Those of us lucky enough to have watched the live streaming of Saturday’s memorial service at Washington’s National Cathedral were sincerely impressed. Sen. McCain, having last year been diagnosed with brain cancer, knew that he would not survive long and he had planned out his own funeral.

And, on a personal note (and no surprise to anyone who knows me), the highlight of the service almost turned out to be one of the musical selections. As a young man singing in choirs – from high school chorus to big-time choral singing when I came to New York – I learned to love the Wilhousky arrangement of one of our country’s great patriotic songs, “The Battle Hymn of the Republic.” The piece was performed thrillingly by the combined musical forces gathered for the funeral and knowing that Sen. McCain had done the planning for the service gave me almost a personal connection to what I was listening to.

At the same time, on another personal note, in planning the service himself and inviting the particular speakers he chose, Sen. McCain provided me with good answers to a question I have been thinking about for a long time now (and in fact referred to in another recent post, back in the summer (Midsummer’s Day Thoughts).

In that post, as I mused about how we – as Americans and as members of a global community – might think about the issues we are facing as a society, I was attempting to come up with names of people – of leaders – who could bring us to a way out of a world-wide situation that seems to be quickly moving to an impasse. As I noted in that post, I have for many years been caught up in what came to be known as the Marshall Plan. I had heard about it as a boy and quite naturally heard more about it throughout my youth and young adulthood. And as I continued to read about leaders (especially our American leaders) who were able to bring about what many refer to as one of society’s most important efforts for “the revival of a working economy” (in the description Secretary of State George Marshall used when he announced the plan at Harvard on June 5, 1947), I kept wondering where we could today find leaders of such commitment and caliber. And I’ve continued looking (I’m now deep into my second reading of Benn Steil’s The Marshall Plan: Dawn of the Cold War).

In point of fact, it’s now clear to me that I was asking the wrong question. I was indeed seeking people who could provide the leadership we need, but as I heard the eulogies at Saturday’s funeral, I realized that it was the qualities, the attributes of the leaders we need to be looking for. Perhaps what we’re searching for is not necessarily a specific person or group of people to lead us in troubled times. Perhaps it’s simply a job description, a proposal, a plan that includes background, yes, but that also considers a body of knowledge, grand thinking, and a call to action referencing those qualities and attributes. If we can be clear about what we need in our leaders, we will find them. The people who can undertake these challenges are out there; we just need – as citizens – to figure out how and where we can find them and then, when we do that, bring them forward to do the task, to lead our society to where it needs to be.

And it’s a long list of attributes, these characteristics society needs to put to work. But from where I sit, they all are going in the same direction, and there was no way to avoid the message that was being delivered to the American (and the world’s) people at Sen. McCain’s funeral. We heard from President Barak Obama, from President George W. Bush, from Secretary Henry Kissinger, Sen. Joe Lieberman, and many others, including several of Sen. McCain’s family members.

It was President Obama who put in context what we’re looking for, telling us that:

President George W. Bush went in the same direction, praising Sen. McCain for his “courage and decency,” and as an exemplar of the storied American values of standing up to bullying and oppression. “If we are ever tempted to forget who we are, to grow weary of our cause,” Mr. Bush said, “John’s voice will always come as a whisper over our shoulder — we are better than this, America is better than this.”

For many of us listening, one of the most moving of the eulogies and the one that seems to be the most talked about since Saturday, was from Sen. McCain’s daughter Meghan:

We gather here to mourn the passing of American greatness — the real thing, not cheap rhetoric from men who will never come near the sacrifice he gave so willingly, nor the opportunistic appropriation of those who lived lives of comfort and privilege while [my father] suffered and served. … The America of John McCain has no need to be made great again because America was always great.

It was a painful and sincerely stated declaration that brought the audience in the cathedral to a sudden burst of applause, a rare occurance at a  solemn funeral.

All of the messages were summed up, it seems to me, in these comments. And the answer to the question I was asking back in the summer, came round full circle in the statement of Mark Salter, Sen. McCain’s longtime friend, as he spoke about the senator’s planning for the funeral:

That’s the job description for what needs to be done.

It was an impressive day, and an appropriate first day for this Labor Day Weekend. As I heard the eulogies I was struck by how pleased I was to have some further guidance for the questions I’ve been asking about what we – as citizens – can do. And, in particular, now that I’ve thought about it, I realize it’s not about the people. It’s not about the leaders. Not yet. It’s about what we want them to be, what qualities we want them to have, the drivers we need them to bring to the table. That was the message of this important day.