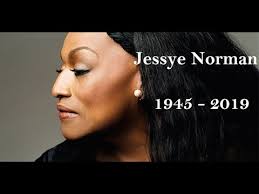 It seems appropriate, at this special time of year, to remember Jessye Norman. The great opera singer died on September 30. The news – including many fine obituaries – has been almost overwhelming in conveying the admiration so many felt for this lady and her special talent.

Yet some of us found ourselves delaying our response to the news. For some reason, we needed a little more time.

For myself, Jessye Norman had been much on my mind, especially this year. In mid-summer, I realized that while I appreciated and had enjoyed several (probably quite a few) performances of music by Hector Berlioz, it was time for me to learn more about it. This new “direction” – we might call it – probably had something to do with Michael Rose’s essay about Les Troyens in the 2013 book, The Birth of an Opera.

Rose’s notes took me back to the spectacular production of the opera that opened the 100th Anniversary Season of the Metropolitan Opera in 1983, in which Jessye Norman made her debut at the opera house. I had been there for the second performance – I wasn’t in the league to attend the opening night performance! – and I greatly appreciated (and thought about for a long time) Jessye Norman’s performance.

So this summer, as I decided to “dig deeper” into Berlioz and learn more about the man and his work, I read everything I could get my hands on. And I listened to several recordings of Les Troyens (including a recording of that 1983 production via The Met on Demand).

Then, on September 30 as we attended our first performance of the new season, we learned of Jessye Norman’s death, just that very day. All of us in the audience were stunned to hear the news, but after a respectful few minutes (and much very sincere applause in her honor), the second performance of the new Porgy and Bess began and was, as I reported at the time, enthusiastically received. I think Jessye Norman would have been very pleased that the evening continued as scheduled and equally pleased that that great American opera was so well performed and so well received by the audience.

And as we all move to the conclusion of these three months of respectful mourning, each of us has some favorite memory. Of course, we begin with the music and – with our dependable New York Times guiding us – just after the first obituary for Ms. Norman we had a stirring selection of her music: Jessie Norman: Hear 10 of Her Greatest Performances, put together by various staff members. Not surprisingly, several of these selections are among my favorites, including Strauss’s “Es gibt ein Reich” from Ariadne auf Naxos (pictured here) and the ever-glorious “O hehrstes Wunder! Herrlichste Maid!” from her portrayal of Sieglinde in Wagner’s “Die Walküre.”

The Times’s selection also included what is certainly my own special favorite of all Ms. Norman’s exceptional performances, her splendid rendition of “La Marseillaise” at the Place de la Concorde in Paris, at France’s 200th Anniversary Celebration on  July 14, 1989. I’ve watched it often, and every time I try to figure out what it is I’m liking best: Ms. Norman’s singing, the unbelievable production qualities (it is an amazing spectacle!), or, Francophile that I am, just the fun of watching and participating vicariously. Obviously, I can’t really pinpoint why I love this experience but whatever the reason, we’ll never forget her if we continue to watch (and listen to) this.

As with all famous performers, we fans seem to give much thought to what so draws us to them. And with Ms. Norman, as I hope I’ve made clear above, it all begins with the singing.  I sincerely believe I agree with someone who remarked, after her death, that Jessye Norman’s voice must be what the angels sound like when they sing. Yet, we understand that with her there was much, much more. And when we think about what she meant to us, we come up with an amazing list of attributes that many of us will not forget, things like her delight in being with others (and in particular, flashing that ready smile, as shown here in one of my favorite photographs), her generosity, certainly her commitment to her work, and, not to be dismissed, her very genuine spirituality. Jessye Norman was a person who took much pleasure in doing what she did well, who loved her fellow human beings, and who was always ready to share her thoughts about her gifts as being given to her by her Creator (a characteristic that often, without much fuss and commotion but always with sincerity, was incorporated into the many recitals and musical events she included in her schedule).

Of course, there are many stories, and as with all stories about celebrities, we can’t be sure about the validity of everything we’ve heard. Nevertheless, even if some stories are apocryphal they seem to evoke, in one way or another, what Ms. Norman meant to us. One story, though, came through with many people doubting that it ever happened. It had to do with the thriller “Diva,” Jean-Jacques Beineix’s scary film from 1981. The plot begins with a young Parisian postman’s obsession with an American opera singer (not Ms. Norman). Following a concert, the young Parisian is able to steal the opera singer’s gown, and from there on, the plot of the film goes off in a much different direction. Did the “stolen-gown” incident really happen? You can hear both sides of the story, but I remember well that in an interview, Ms. Norman described clearly that it had, indeed, been her gown that was stolen, and when the young man was persuaded to return it to her, they became friends and got to know one another.

Then there are the real-life attributes that defined Jessye Norman. With respect to her generous side, for example, there were many references in quite a few interviews and news items to how she devoted time and attention to younger people, and in particular to the support of the Jessye Norman School of the Arts in her hometown of Augusta, Georgia. A free, comprehensive after-school arts program serving mostly disadvantaged middle and high school students, the school offers professional quality fine arts instruction for gifted and talented children who are economically challenged, yet who possess a strong desire to pursue the fine arts.

In another famous charitable arrangement, she was extremely devoted to working with The Girl Scouts of America, with her support of that association going back to the early 1980s. She had been a girl scout when she was young, and she had been made a lifetime member of Girl Scouts by the troop of the American Embassy in Paris about the same time she left Paris and moved to Westchester. That’s when she took up selling Girl Scout cookies, for which she became rather famous. As she told it, “When I was a child, I was rather shy, and it was too difficult to go up to someone and ask them to buy Girl Scout cookies. And now I will ask perfect strangers at very formal dinners if they would like to buy cookies.”

And why did she sell Girl Scout cookies? She had a quick answer: “…to support Girl Scout camp scholarships, thus making it possible for girls who could not otherwise afford to go to camp to be able to enjoy camp and experience being away from home.” And typically, when she was acclaimed for selling sometimes more than 2,000 boxes a year, she shared the praise, remarking in another interview that “I don’t want to pretend that I do this all alone. I couldn’t possibly with my sort of ‘night job.’ I involve my whole staff in selling Girls Scout cookies. Everyone enjoys it. It’s fun.”

So we come to Christmas, and for me, Christmas will always provide a very particular highlight of the season. It is Jessye Norman’s very special performance at Ely Cathedral in 1988. When Andrew and I put up the tree, the music is playing in the background, playing from a CD or, more likely, from the filmed performance (A Christmas Concert at Ely Cathedral with Jessye Norman), and that’s the beginning of the Christmas season at our house. The concert includes the now-famous “Jessye’s Carol (Christmastide),” written by Composer Donald Fraser and with lyrics by Jane McCulloch. The song has now become almost standard in many churches and at caroling events, and it will live on as a true memorial to Jessye Norman. And the larger concert itself is a remarkable performance, clearly representing Ms. Norman’s very special spirituality. She’s not just singing these familiar songs. She is sharing them with all who listen and, at the same time, sharing with each of us a very special intimacy, clearly demonstrating her own version of love for all humanity.

At this particular Christmastide, I greet you all with love and with hope (especially hope) for the future. And all our good feelings were summed up, perhaps as a little bit of “early” Christmas, through the support of the good people at the Ford Foundation and the Metropolitan Opera Association who put together the memorial celebration for Jessye Norman. I felt very blessed to have been invited to join in celebrating her life.

The program, held at the Metropolitan Opera House just before Thanksgiving was titled A Celebration of Jessye Norman – 1945-2019 – Performances and tributes in honor of an extraordinary American artist. And it truly was a celebration, as most emphatically shown by this shot of the Alvin Ailey American Dance Theater performing in Ms. Norman’s honor an excerpt from one of Ailey’s most famous dances, from Revelations. It was “Rocka My Soul in the Bosom of Abraham” and to no one’s surprise, this elegant and exuberant performance brought down the house.

And while I would love to share everything else that happened in the Jessye Norman Celebration as my own Christmas gift to you and your loved ones, I cannot do that. I’ve written enough now, so I will simply refer you to Michael Cooper’s good report in The New York Times the next day, on November 25, 2019. The story ran as Jessye Norman Honored with Starry Met Opera Memorial and Cooper ended with a story that I think, for many of us, sums up what we are trying to say as we remember Jessye Norman:

The actor and writer Anna Deavere Smith, a friend who often traveled to hear Ms. Norman sing, remembered an outdoor concert in Menton, France. The organizers arranged to have traffic stopped before the concert “to clear the air as much as possible” so auto fumes would not inhibit her singing. But there was little that they could do about a train that was scheduled to pass near the stage during the concert.

“I do remember that when the train came through Menton, and Jessye was hitting a high note, I heard Jessye,” Ms. Smith remembered. “She sang through it.”

She said that Ms. Norman had often spoken of “singing through things,” and of honoring the music that came from slave ships, where people sang through their experience.

“Until this morning, this very morning, I thought that Jessye’s voice simply overrode the train,” she said. “I don’t think that anymore. Now I understand that Jessye Norman had the ear, the timing, the love of song, the wish to share and the will to sing through, and with, the roaring train. In the same way, she integrated several musical histories to grace the world with the power of her voice.”