Good friends Charles and Nerisa decided that before Andrew and I got too deep into our safari, and since our colleagues had not all arrived yet, we would have a private day out, over near the Ngong Hills.

Now anyone familiar with Kenya and the literature about the country has heard of the Ngong Hills, the great line of peaks along the edge of the Great Rift Valley, and to the southwest of Nairobi (in fact, I’ve posted a couple of blogs about the Ngong Hills, with some of my thoughts here and here). So Charles and Nerisa took us to another of those private “resorts” that seem so popular in Kenya (sort of like Paradise Lost but not quite as large, or as historical). This one, known as Oletepes, is just as special in its own way, a huge wide-open field with tables and chairs set about and the spectacular view of the Ngong Hills in the distance.

Drinks and meals are served, but I had the impression that Oletepes is primarily a place where people can go to sit and enjoy being outdoors, with magnificent scenery all around. The day we went happened to be a national holiday (Jamhuri, Kenya’s Independence Day), and I was surprised that there weren’t more people at the resort. Apparently most people found a different way to celebrate the nation’s independence (and since the new Constitution had just been passed last August, with a big celebration a few weeks later, perhaps most folks had done enough “national” celebrating!).

As for Andrew and me, we were very pleased with the whole idea of the day out with Charles and Nerisa, and Oletepes was a very special place to go. There was, from time to time, a very strong wind (which is why, I suppose, the park has a few domed tents for providing shelter, particularly for campers who stay overnight), but we didn’t allow it to interfere with our good time. 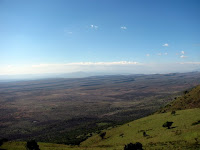 We were also impressed with the waiters and the other staff, and with how hard they all work. Although guests drive their automobiles to the place where they want to sit and relax, or spend the night in the tent, the kitchen is a long ‘way off, and the wait staff walk back and forth carrying whatever is necessary to bring the drinks and meals to the guests (and they manage to keep the nyoma choma hot, which is in itself a major accomplishment!). Can’t imagine that level of hard work from wait staff in the States or Western Europe, but as we talked about it, we figured it out: with such high unemployment in Kenya, people are happy to have jobs, and to work hard. Don’t think Westerners are prepared to work that hard, or walk that much, but Westerners also don’t have the high levels of unemployment like that in Kenya. So perhaps what we’re seeing in Kenya is an explanation (or the other way ’round).

In any case, it was a terrific day out, lots of fun (as the photos in this album show), and with a climb up into the Ngong Hills to once again see the views of the Great Rift Valley, our day out provided a delightful respite during our Kenyan holiday.