Even in Kenya there are “winter Sundays,” but the mildness of the day – even when slightly overcast – seems to banish any thoughts of gloomy winter. While the Kenyans might grumble a little about how cold it gets, the weather is still something to be grateful for. 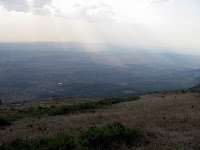 And what better way to spend a Sunday afternoon with friends than walking in the Ngong Hills? Along a ridge of the Great Rift Valley (shown here), the views are equally as spectacular as those from the viewpoints on the highway to Nakuru. Just breath-taking (even, as I say, on a day that is not bathed in glorious sunshine – I can’t even imagine how spectacular this sight would be on a sunny, summer’s day!).

As for why the hills are called what they’re called, legend has it that the term “ngong” was chosen because the four peaks of the ridge appear – or seemed to appear – to be knuckles to the Maasai, and “ngong” is their word for “knuckles.” O.K. I can go along with that. Whatever they’re called, they are beautiful to behold, and situated so that on one side the Ngong Hills overlook the Nairobi National Park and on the other the Great Rift Valley, a visitor has to be a little aware that he is experiencing sights unlike what he would see anywhere else.

In addition to the natural beauty of the hills, the Ngong Hills since the early days of the last century have also acquired a rather romantic aura, since Karen Blixen (Isak Dinesen) opened Out of Africa with the line “I had a farm in Africa at the foot of the Ngong Hills,” and the hills figure prominently in everything we know about Blixen and her life in Africa. She came to British East Africa in 1913 and one has the impression that the Ngong Hills were some sort of overwhelming presence in her life (as they would certainly be in mine, if I had ever undertaken to do what she did).

And it was to the Ngong Hills where she took the remains of her lover, Denys Finch Hatton, after his tragic death in 1931. The famous big-game hunter loved the hills, often hunted there – as well as in many other places throughout the territory – and for years, it was said, the lions would come to lie in the sun on his grave.

Whether the story is true or not, it is a wonderful way to think about how a man who loved Africa so much would be so respected. We did not visit the grave (although I would have liked to have done so, romantic that I am), as it is on the far side of the peak we were visiting and the walk would have been too long for so late in the afternoon. Perhaps another time we’ll pay our respects to Denys Finch Hatton.

Today, on the peak we visited, the views are spectacular. And only made better, it seems to me, by the small forest of wind generation turbines erected there. If extracting energy from the wind is a practical method for reducing our dependence of fossil fuel, I’m all for it. 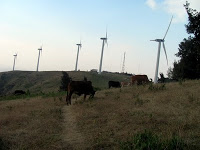 And there’s no question about it, these are awesome machines, made even more splendid by the tremendous contrast of the Maasai herdsman with his cows (English-speaking Maasai, for some reason, don’t use the word “cattle” – they say “cows” when they mean to indicate the plural – I don’t know why). I loved wandering amongst his cows with my friends, and he seemed to be pleased that we were there (photos are at Mr. Guy’s Ngong Hills Album).

We had a good time strolling about, enjoying the views, watching the other people, and, yes, being careful. As we came up the road, the guard at the gate actually tried to discourage us from going further (and to be fair, it was a little late in the afternoon). But we persisted and he gave in. Not without warning us first, though, since it seems that there are in the Ngong Hills many places where people can be lured off the road or the path or the trail, and awful things happen. And more often that we want to know about.

But the guard was kind, lowered his rifle to take the reduced entrance fee he permitted us, since we seemed so determined, and made us promise that we would be coming back down the road before it began to get dark. We were fine, and we had no problems, and we enjoyed the views and laughing with one another. And there were plenty of other people, so it didn’t seem particularly dangerous, and we enjoyed ourselves.

But I suppose he knew was he was talking about, so we complied.