One of the pleasures of travel is the unexpected, and my time in Kenya provided me with plenty of opportunities to see and learn about things I had never known about before. And to go to places that I didn’t even know existed.

That delightful situation continued with the recent safari, written about in some of these posts. Four discoveries, in particular, made me stop and re-think some of my ideas and preconceived notions about Kenya (and about Africa). Sadly, all of these did not happen when I was accompanied by everyone in our safari group, so I’m recounting these experiences for them as well as for anyone else who might be interested.

The first of these took place in our first week in Kenya. Andrew and I had not yet been joined by the others, and our safari excursions this first week were just the two of us, with Charles, our driver extraordinaire. And to demonstrate why I use that term, let me describe how I learned about this first very special place, known to very few people who are not native Kenyans.

It so happened that a few weeks before our safari – after our itinerary was “set,” so to speak – Charles had had occasion to take another client about, and she particularly wanted to go to Paradise Lost. The name refers to a private “resort” or “park,” often used by local Kenyans (especially on week-ends) as the site for picnics, games, horseback- and camel-riding, and such family-focused activities. And while the origin of the name is a little obscure to me (just as is the reason the words are used for another private resort, not connected with this one and located near Mombasa, on the coast), I suppose there’s some connection between the word “paradise” and the usual meanings associated with it, and the privacy connected with the resort not being a very public place (“lost”).

Such speculation aside, however, I’m happy to report that this Paradise Lost is one of the most intriguing places I’ve ever visited. First of all, it is spectacularly beautiful, overlooking a large lake that is used for many recreational activities. The resort takes up about 54 acres, and it’s located about 8 km from Nairobi, off the road to Kiambu (in fact you can see Kiambu Town on the other side of the lake).

Aside from the beauty of the place, however, Paradise Lost is special for the non-Kenyan visitor for a couple of other reasons. First of all, there is the almost unbelievable charm (and little bit of scariness) of walking through the dense forest (the Kenyans prefer to use the word “forest” instead of “jungle”). There are paths, well marked, but the walking is still a little rough. And I can imagine that the paths might be very difficult to maneuver on a week-end, when so many of the Kenyan people are crowding into the park. We didn’t have that problem, however, for Charles had blocked out time for us to see Paradise Lost as we embarked on our Thika safari, and as we arrived – very early in the morning – we were the only people there. Quite a treat!

So the forest is special, as you can see from these photographs and the larger set of pictures in the album A Kenya Secret: The Paradise Lost Park and Historical Site.We were intrigued as we walked deeper into the forest and could hear the first sounds of the waterfall (shown above). We kept on, never guessing that the waterfall itself would be so special. And as we approached, well, it’s hard to describe just as lush and green the surrounding plantings are. The waterfall itself, which you can walk behind, is magnificent. So high and stately. Truly breath-taking.

What came next, though, really surprised us. As he had spoken with us about Paradise Lost, Charles had made several references about the park and its caves being the place where the “freedom fighters” were able to hide, especially after they had conducted raids or otherwise engaged in their fight for freedom. We heard what he was saying, but we weren’t very clear about the implications of the term.

Finally it dawned on us. Charles was referring to what, in America and Western Europe, had been referred to (and taught to us as students) as “the Mau Mau rebellion” or “the Mau Mau uprising.” Once we figured this out, we were just a little embarrassed to have taken so long to “get it.” After all, as Americans, hadn’t our own ancestors had a some experience with “freedom fighters” as well?

The story, as we learned it, was particularly interesting, and especially in light of this new way of thinking about it. The Mau Mau “uprising” had, yes, been an uprising, a rebellion, but to Kenyans, it was an event at the beginning of their national history that is as monumental as our own American Revolution. We even learned that the term “Mau Mau” is not some sort of tribal or rebel group name, as many young people in the West were taught back in the 1950s. The words “Mau Mau” are an acronym of a Swahili phrase, Muzungu Aende Ulaya, Mwafrika Apate Uhuru, which means something along the lines of “let the Europeans go back and let the Africans be free.”

Apparently because they were hidden away, the caves seem to have been forgotten about after independence in 1963. Some 2.5 million years old, so the archeologists say, the caves were re-discovered by workers in 1996, with archeologists from the National Museum of Kenya finding some human remains 8000 to 12,000 years old, and rock artifacts from the Late Stone Age. 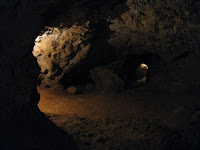 So the visit on into the forest, the walk along the forest path, and finally the climb into the caves was a very special, private treat for these non-Kenyans. As for being inside the caves (one of which is shown here), well, that is a different story since I’m not much for going into such enclosed spaces, and through such narrow and confining openings in the rock. But once we were inside, I was amazed at how big the caves are, and how much room there is inside. Indeed, we were told that the freedom fighters after a raid or other fight would easily slip into these caves behind the waterfall and completely elude the British troops looking for them, who had no idea where they might have gone. For the visitor to Paradise Lost, that story makes absolute sense.