I was the first mzungu to visit Nyanguru Village. 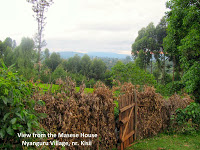 I was brought to Nyanguru Village, a lovely place high in the hills near Kisii, by Charles Ombongi Masese, my friend and colleague (and also my driver when I lived in Nairobi). My first visit was in April, 2010 and I’ve borrowed some of the photographs from that visit to share again here, as I re-live some of the experiences of that visit and the most recent, with friends from America who were on safari with me in July.

I’ve written about Nyanguru Village before (see links below) but in light of the recent news from Kenya, I somehow feel the need to write more about the people I’ve met, especially those who make up my “Africa Family,” so special to me.

The city of Kisii is several hours from Nairobi (“upcountry” as the Kenyans say), and since our first time together – when Charles had been sent to the airport to meet me upon my arrival in Nairobi for my “new life” in Kenya (albeit temporary, just for a little over a year) – we had often spoken of our families and our very different personal lives. And from the beginning, it was clear that Charles wanted me to visit his family in Nyanguru Village.

And I – very anxious to get to know Charles and his family – was as interested in going to Nyanguru Village as Charles was to have me. Although he worked in Nairobi and lived there most of the time, he is the consummate “family man.” Whatever his current responsibilities and activities in Nairobi, Jane and his parents and his children were (and are) never far from his mind. 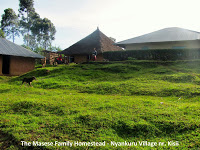 It took a while. We traveled together to other places often, for Charles had considerable experience as a safari driver and commentator (which I’ve described elsewhere), and we had no trouble going off for frequent week-end safaris to some of the parks and game reserves closer to Nairobi. And thanks to Charles and his great talent for spotting game, we put a lot of time into enjoying the wildlife and the natural beauty of Kenya (and, not incidentally, getting to know one another very well). My professional responsibilities, though, kept me from traveling far, so I didn’t get to Nyanguru Village as quickly as we hoped. 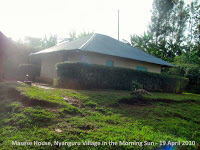 When I did get to visit Charles’s home, it was a totally new experience for me. And one I’ve never forgotten. For one thing, although I had had professional journeys to different parts of the world, including South Africa, I had never been to Kenya, and I had never visited any local villages or towns, since my work was usually connected to businesses or institutions located in metropolitan regions. And the touring activities I often engaged in when I did business travel were just that, tourist activities to places like Kruger National Park (where I had my first-ever safari).

So to be invited to a community village (we try not to say “tribe” any more, since the Kenyans want to think of their country as made up of different “communities” rather than “tribes”) was very special, and I knew from the moment we arrived that I was going to be treated with great honor and great respect (the latter having to do – to my surprise – with my age, as older people are indeed treated with great respect throughout Africa). 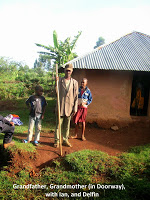 It was in a conversation with Charles’s father, a fine gentleman and a leader of the village (nearing 90 years of age when this photograph was taken with two of Charles and Jane’s children), that he pointed out that I was the first mzungu to come to Nyanguru Village. As I think I’m described before, there are three “official” languages for Kenyans: English, Kiswahili (or simply Swahili), and one’s “mother tongue,” the original language of one’s community. As Charles and his family are members of the Kisii community and speak that language, he and his father spoke it with one another. I listened (I really can’t tell the difference between Kisii – or any of the other mother tongues – and Swahili anyway). With Charles translating for me, I learned that for some reason no other white man had ever been to Nyanguru Village, and I was the village’s first mzungu.

Nowadays the term usually refers to a white person, but as I was identified by Charles’s father, it was explained that the term, for me as he thought of me, described me as a white man (apparently in colonial days and the early days of Western expatriates in what would become Kenya, “white man” seemed closer to what the locals were attempting to say – and it’s my guess that Charles’s father, because of his age and rural environment, was looking back to earlier times). And the word stuck, for Charles always said that every time he spoke with his father, from the time he met me until he died in April of this year, this kind gentleman asked Charles: “And how is our mzungu?” I was greatly honored, I can say.

As for describing the people of Nyanguru Village, I am somewhat at a loss for words. They are very friendly people and, like most Kenyans, they smile a great deal and enjoy engaging in good conversation, whether all together in one language or sharing translations via people like Charles, who live in “both worlds” (and he is very good at helping us all understand what is being said). There’s a lot of laughter, and as I think comes through in some of the posts noted below, the houses and yards are full of children romping and running and playing with one another. Just great fun to be with, and as some later posts will show – reporting on the latest visit to Nyanguru Village this past July – the children and the adults all seem to have a good time with each other. 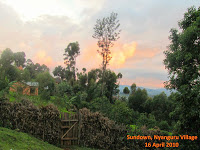 There is, of course, sadness, as in all lives. In Nyanguru Village the sadness that comes into our lives is given its due attention when required, and with a great deal of beauty, some version of ceremony, and, when it is appropriate, shared with others who are part of the community’s extended “family.” When my friends and I arrived in Nyanguru Village and climbed the hill to Charles and Jane’s home, our visit began with a stop at his father’s grave, just a few steps outside the house where he had lived (the custom among the Kisii community), adjacent to Charles’s house. Anticipating our arrival, a large photograph had been set on the grave, next to the wooden cross marking the head of the grave, and we and many other visitors from the village all gathered around for a few words and pleasing memories, ending with devout and very heartfelt prayers of thanksgiving for his life and – a little surprising for me – prayers of thanksgiving that we visitors from far away were able to gather together at his grave with the family and friends to honor him. It was a very moving moment for us American visitors, and as we thought later about the very special place that we have in this family’s life, with their arranging for this special observance upon our arrival at the house, it was indeed yet another sign of how our two societies and our cultures have been able to come together.