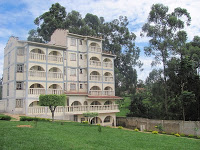 Saturday in Kisii began with a nice breakfast at the Mash Park Hotel, where I was staying. Another look back into the days of colonialism and the attraction these places had for European travellers (and of course the expatriates, who came to visit places like this and liked it so much they just stayed).

Very curious about the name but didn’t have a chance to ask anyone about it – or kept forgetting. I suppose there was a Mr. (or Ms.) “Mash” and a park somewhere nearby was named for that person, but it still sounds funny, doesn’t it?

It’s a lovely old hotel, and as you can see from the photograph, it’s quite grand in design. It’s glory days are over, although the outside and the grounds are kept up. But it’s really not up to snuff. As I have a son in the hospitality industry, I’ve learned to judge these things pretty carefully and the Mash Park, well, if you’re travelling alone and you don’t mind looking in the other direction once in a while, it’s OK. But don’t take your mother-in-law or your latest girlfriend there. Or boyfriend. It’s kinda sleazy in the rooms.

But it was nice to look at, and very picturesque. And it was a place to sleep.

Enough editorializing. Let’s get on with the day. The First Family of Nyanguru Village came to pick me up and we all went off for the day to visit the soapstone quarry at Tabaka (and, as Charles says, “it’s just a name” and has nothing to do with tobacco). Surprising, since everything else is grown in the area, thanks to that wonderful weather I was mentioned last time. Bananas, rice, every kind of fruit and vegetable you can think of (except peaches – I can find boxed peach juice at the supermarkets but peaches are not for sale in Kenya, at least as far as I can determine). Odd that the Kenyan farmers have never tried raising tobacco.

Of course I took some PHOTOGRAPHS as I’m doing most of the time now. The camera is a great boon to my travel, and when I’m with the Masese children, there’s never any need to worry about entertaining them. Each has become a real expert with Mr. Guy’s camera.

We travelled by car on the famous (or infamous) Kenyan roads. There has been much progress on the paved roads connecting the cities but once you’re off the main roads (of which there aren’t very many), you are back on to the unpaved, red clay lumpy roads that bounce you all over the place. And with the rains, we’re talking major, MAJOR red mud, all over shoes, trousers, and even – after you’ve taken a couple of falls – on your jacket, shirt, and even in your hair (don’t ask).

But travel we did, bumpy and all. Not fast. Traffic moves very slowly on these roads, and when they are crowded, well, you just sit and wait. And thank your lucky stars that your driver is taking care of things.

When we got to Tabaka and started asking around, we were delighted with what we found. First of all, the town is almost totally given over to soapstone carving (the Kenyans are famous for it, and Kenyan soapstone figurines are a popular export – and of course the wonderful funny animal carvings make delightful gifts for grandchildren). There are people all over the place, sitting on their front porches and carving away. If you ask, some of them will let you sit with them and watch them work, but we didn’t do too much of that, as we wanted to get to the quarry and visit the source.

Again, one is so impressed with the gorgeous countryside surrounding the place. The quarry isn’t too big (there are others in the area, but they’re not too close together, probably several miles apart), and of course the place has houses all around. I was delighted with the friendliness of the family “grandfather” who came to greet us, speaking beautiful English (I’m still a little surprised at how well so many people in Kenya speak English, and I don’t mean to be patronizing – it is after all required in the school system and has been for decades). He greeted us warmly, turned us over to two of his sons to be our guides, and off we went.

I probably learned more about soapstone carving than I ever need to know, but we had a splendid afternoon of it. The day was beautiful, and the rains held off until we were on our way home.

And this mining out of the soapstone truly is manual labour, in every sense of the word, as you can see from the photographs and how hard the men are working.

After our visit, we wound our way back to the old man’s house, where he dutifully brought out some splendid treasures to show us and from which I dutifully made my selection (but the grandchildren presents were purchased later, as we made our way back through the little town of Tabaka). We really enjoyed getting to know the family, and learning about how much work goes into mining the soapstone pieces from the quarry. And then the carving. It’s so delicate and it is such a splendid skill. I really admire these artists for the lovely work they do.

And so back to Nyanguru Village for another evening of good food, many, many visits from many villagers, and good conversation. And if at any time the conversation flagged and I wanted to get it moving again, all I had to say was, “And what do you think of our President?” and the faces would light up, even from the villagers who speak little or no English. The Kenyans are so proud of Mr. Obama. And why not? His grandmother still loves in Kisumu and her house has been opened for visitors to “drop by” (which I definitely would have done, had I had time to fit in a visit!). I was shown her photograph and what a lovely, lovely lady she is. She must be so proud. But then, aren’t we all?