While I had made it clear to Charles and to Tomas that I would dearly love to see more elephants, as many as we could fine, I was pretty comfortable with the idea that one doesn’t necessarily see what one expects (or wants) to see on a safari. 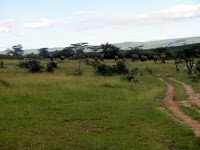 So I was pretty satisfied with our previous sighting, and if that had to be the extent of my elephant viewing, I would not allow myself to be disappointed. That was a magnificent animal and even though, while early on in our visit with him we speculated about why he was out there all alone (even wondering if he were ill or indisposed in some way), Tomas assured us that it is not unusual for a single elephant – especially a male – to be out by himself. And I knew a little of that, for in my readings I had come across one author who commented about how males are generally “invited” to leave their birth group when they are in their early teams. While some of them roam about in bachelor herds, it’s not at all unusual to see a male by himself. After all, he’s hardly in any danger, with all his bulk, and except for the humans (especially the poachers, but they are pretty much on the wane now, particularly in Kenya where there is a “shoot-to-kill” law for poachers caught in the act), I don’t think the male elephants have much to worry about.

Which leads us to what had to be one of the most remarkable days of my life. We were out on an afternoon game drive, and we had already seen some lions and even a big ol’ rhino over on the top of a hill, too far away to photograph. But there didn’t seem to be much else about (except, as always, the impala, the African buffalo, the wildebeest – they’re always around!).

So we just kept on driving, leaving the track when we wanted to and meandering on across the grass on several occasions. There were very few people out on game drives this afternoon, and only a few vans and 4WDs could be seen from time to time, so we ourselves were pretty much on our own.

And yes, from time to time one of us would comment about how nice it would be to see some more elephants. And in fact Tomas did spot a herd quite a distance away, deep in the forest, but we could hardly see them they were so far. Then Charles saw a herd off in another direction. These, too, were very far away, and there was a lot of grassland between us and them, and some pretty deep ravines, but they looked pretty inviting. So we didn’t debate long.

So Mr. Charles took out across the grass, with the van bumping and jumping all along the way, and Tomas and me standing in the back and holding on for dear llife. We were way off the track by now, but as we began to climb slowly up the other side of the ravine, where the grass was much shorter, there up in front of us was one of the most magnificent herds of elephant I could ever hope to see. We drove up a little nearer, turned off the engine, and just sat there and feasted our eyes.

Pretty soon the herd began to wander off into the forest, and lo and behold! There was another huge herd (we’re talking about 12-15 adults and who knows how many calves?), off on the other side. Then a big bull (massive – probably one of the biggest elephants I’ve ever seen) went off by himself, into a different part of the woods, and as we watched him move away, we realized that there in front of us, off in the clearing, was a huge herd of giraffe, all coming out of the trees one at a time, looking around, them coming out into the open area. We drove over a little closer, again turned off the engine, and just sat there. 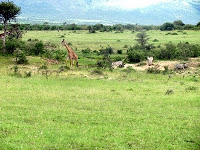 Soon more giraffes, more elephants, and of great surprise to us, zebras. I tried to keep taking pictures but it was hard. I was just too excited, but some of what I took – probably far too many! – are here at Mr. Guy’s Masai Mara (13) Album.

And it was an amazing spectacle. It was as if we were at some sort of elephant-zebra-giraffe show, and we were surrounded on all sides. And off to the right, Mr. Big Bull was having himself a grand old time, snapping off trees so he could get to the juicy leaves at the top of each one.

We hadn’t thought about it, but as we were parked in a clearing, we could easily be observed by the other tour vehicles on their own game drives, and pretty soon two or three other vans drove up to join us. All the drivers and guides know the rules of the road, of course, and they all thanked us as they came up alongside, and we all sat quietly, saying little to one another but sharing some good stories and observations. We even starting counting the animals, but I soon last track (Charles counted the giraffes, and he got up to 38 before he stopped!).

“I’ve been doing this a long time,” he said. “I’ve never seen anything like this. This is historic.”