So the debate continues: What is Mr. Guy’s Favorite Animal? After all those affectionate words about the lion in the previous post, and all that’s been said in earlier posts about the docile gracefulness of the zebra, a picture seems to be falling into place. 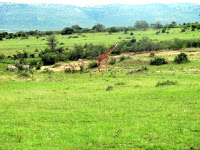 Careful. We haven’t spent much time speaking about the giraffe and if you want to think about graceful, it’s hard to compare the movements – and the visual beauty – of a giraffe quietly moving across the plain, with some lovely foliage climbing up the hillside behind him. Pretty spectacular. George Balanchine couldn’t have staged it better.
As for the zebras… Their gracefulness will be pretty clear, I think, in a later post (but truth to tell, although there are plenty of them at the Masai Mara Game Reserve, for some reason there did not seem to be as many herds of zebra wandering about when I was there, just as I’ve observed on other safaris – again supporting the idea that a game drive is basically just a drive that provides the potential to see the wildlife – there are no guarantees). 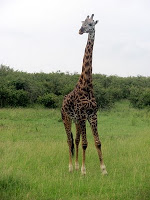 But oh, the giraffes. Until I got to Africa, I never knew there were actually three races of giraffe, and truth to tell I’m not sure I’m clever enough to tell them apart. Apparently their distinctive differences have to do with where they live, the Maasai giraffe in the south and east of Kenya (and presumably what I saw at Masai Mara). In the north there is the reticulated giraffe – now endangered – and in the west the Rothschild’s giraffe. I remember Charles pointing the Rothschild giraffe out to me as we travelled on one of the safaris – I remember the name – but I’m afraid I didn’t look closely to see what made it different. Or perhaps it was when Charles and I visited the Giraffe Center in Nairobi last autumn at some point, or when I posted some pictures of giraffes from Hell’s Gate National Park on 6th January.
But it doesn’t matter. No matter which of the three I see, I continue to be amazed at the beauty and the elegance of the giraffe, and it’s easy to see just how captivated I am, for I’m anxious to share even more giraffe photographs, these from Masai Mara, Mr. Guy’s Masai Mara (11) Album.