I can hear the skepticism.

OK. Got it. But bear with me and I’ll tell you about it, even show you some pictures.

Yes, there is a place in Kenya where the water runs uphill, and if you turn the engine off and put the car in neutral, the car will drift along – uphill – as if it were drifting down the hill.

You can experience this phenomenon just outside the town of Machakos, not far from Nairobi (about an hour’s drive or so) and it has a reputation. In fact, the whole area has a reputation for connections with magic (some say “witchcraft” but I think they mean magic), so it’s not surprising that strange things happen on the roadway at its 45-degree (or so) incline.

I suppose it’s pretty well known, because before Charles and Nerisa and I went there, other people had told me about how it’s on the news from time to time and in fact, to see the water flow uphill was why Nerisa induced us to go there, as she had never been to Machakos.

And I had found this on a  travel site from an October, 2008 post:: “While in Kenya visit Kituluni Hill in Machakos…. You actually get to see your car moving uphill while in neutral gear. It is even said that cyclists experience ease of cycling once they reach that place, and also if you pour water on the tarmac you get to see it flow upwards!”

So off we went, driving through some beautiful countryside on the way and even, for goodness sake, spotting a herd of camels grazing in the field as we drove past. I knew there were camels further north in Kenya, but I was surprised to see them in this part of the country. They seemed very contented, and very much at home. 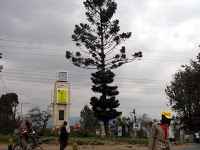 We drove on into Machakos. Not a very interesting place, but has some claim to fame, as a treaty of one sort or another was signed there a couple of decades ago. And when Princess Margaret came to visit in 1956 the town leaders erected what must be one of the ugliest clock towers I’ve ever seen. Presumably it did not have adverts hung on it when Her Something-or-Other visited, but I would have liked to have seen the look on her face when she was told the tower had been built in recognition of her visit. Poor Margaret!.

But the place did get interesting when we began hearing stories about strange happenings (more of that later), and when we made our way to where the water flows uphill. We asked several people and got a number of different directions, but Charles finally heard one that sounded trustworthy, so we took that person’s advice: “about six kilometers on this road,” he said, pointing “and when you get to a very sharp curve, you’ll see where they are making bricks, and go on a little way and you’ll be there.”

Yep. There it was. As we climbed the pretty steep hill (as I say, about 45 degrees, as you can see in the photos at  The Machakos Adventure), we saw the curve up ahead, and then we saw the pile of bricks, and we pulled over. Pretty soon a young man came down to speak with us. He and Nerisa and Charles conversed in Kiswahili, and I listened very politely and they interpreted for me (which I appreciated but I felt very foolish later – as we were leaving – when the young man spoke to me and started a delightful conversation in one of the finest Oxbridge accents I’ve ever heard – I suppose he had been educated in England – or had had English schoolteachers!).

Our young man then got a jug of water and brought us over to watch, and sure enough, as he poured the water gently on the road, it started to drift uphill. Then he got a big jug of water and sloshed it down the pavement, and of course it flowed downhill for a bit, from his pouring it with so much force. But then – wait for it! – the water started to slow down and came to an eventual stop and, yes, starting drifting back up the road.
I am not making this up. 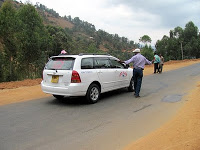 Then our host suggested Charles pull the car out into the road (directing him to the spot) and, yes, put the car in neutral and turn the engine off. This he did, and we all stood by dumbfounded as the car drifted up the road, with Charles running along beside it. Amazing!

Is it magic? Of course not. I presume it is some sort of anti-magnetic field under the road. Or some other scientific explanation (note to scientists reading this post: tell us what’s happening!).

But it does happen. I saw it happen. And at the Muthaiga Country Club with friends a few nights later, I told my dinner companions about our experience and learned that there is another place in Kenya, nearer the coast, I think they said, where the same thing happens. In fact, one of the couples I was dining with (my hosts, as a matter of fact) was going there for a holiday the very next week-end. Interesting coincidence.

As for the magic? I don’t know what I want to believe, but I heard some strange stories when we were driving about in the Machakos area. One will suffice: apparently there is no theft in the area and indeed people sleep with their doors unlocked. It’s a very safe place and no harm every comes to anyone.

Because if anyone tries to do anything bad to one of the Akamba people, he will regret it.

An example: suppose you go onto a farmer’s land and you steal a big bunch of bananas. You’re walking across the farmer’s land with the bananas slung over your shoulder and he sees you. Due to his powers, he can fix things so you can never – that’s NEVER – take the bunch of bananas off your shoulder. Until he permits it, and if he wants to, the farmer can have you carrying the bananas for a long, long time. The Akamba people have these kinds of powers, they say. And there’s more, for when the farmer does allow the thief to finally take the bananas off his shoulder, he is doomed, and he will die before too long.

There’s another story, too, about the magic powers of an Akamba husband who has been cuckolded and what he can do when he catches the couple, but we’ll save that story for another time.