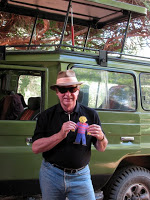 Here’s Stanley and me as our group left the Sopa Lodge in Amboseli National Park. We were travelling over into Tanzania to go to the Ngorongoro Crater. Little did we know when we left the park that the real safari adventure would begin (perhaps giving new meaning to the word adventure). We knew we would be heading across the border, since the famous Ngorongoro Crater is over there, in the northern part of Tanzania, and we wanted to see all the spectacular wildlife that lives in the crater. Mr. Charles and I had worked hard to pull together all the border-crossing details, and we were prepared for that. And truth to tell, getting across the border wasn’t a problem. Getting to the border and driving along the roads was the problem.

We had no idea of the condition of the roads. If I had been smart, I would have suspected that the roads would be difficult, since I’ve lived in Kenya for a year and almost every trip is a challenge to me as a passenger. Not to Mr. Charles as a driver, of course. He’s an expert in all of this. And the road to Amboseli from Nairobi hadn’t been a problem, and we had made excellent time on that trip, considering what we had to deal with since. For in addition to the condition of the roads after we left Amboseli, for the first time in our safari we found ourselves victims of an almost-swindle, and it was a pretty difficult situation. Our Land Rover had been contracted for by a third party (that should have been a warming) and the man who showed up with it turned out to be the vehicle’s owner. He was coming along to do the driving (for this venture, Mr. Charles was to be a safari participant, just like the rest of us) and to be our “guide,” although this latter description turned out to be something of a misnomer. He was, as far as I could tell, something of a con artist, and the rickety vehicle he showed up with…. Well, let’s just say it was not designed to provide any sort of comfort to the passengers. About ten years old and in terrible condition, the vehicle made us worry all the way to Ngorongoro Crater and back.

And to make matters worse, our “driver” apparently had other ideas in mind, like changing our schedule so we would be forced to stay in some hotel of his choosing in Arusha, taking us to places (off our itinerary) to purchase things, that sort of thing. Fortunately, we had our reservations at the Sopa Lodge in both Amboseli National Park and at the Ngorongoro Crater, so we just told him to forget it (and thanks to the Kenyans in our group, and particularly Mr. Charles, I think he soon got the idea that this group of travellers wasn’t going to be swindled!). 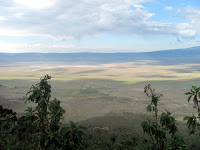 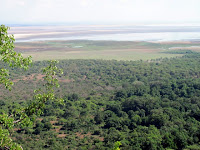 So after much difficulty, we got to Ngorongoro Crater, and despite the problems of the drive, being there was well worth everything we had to put up with during our journey. First of all, I can’t say enough about the views. The crater has to be one of the most beautiful places on earth, and even though I’ve included a few photos here (and expect to post more once I’ve finished telling Flat Stanley’s story), there just aren’t words to convey the feeling of spaciousness and sheer natural beauty of Ngorongoro Crater. I can see why it is one of the most popular safari attractions in the world (although, to be fair, the Tanzanian leaders are being very careful to protect the crater, and the number of visitors is strictly controlled).

Another part of the Crater’s attractions, it has to be said, are the lodges. At Ngorongoro Crater, the Sopa Lodge is – of all the ones I’ve visited – the best. Beautiful and absolutely first-rate in service and accommodations (right down to having staff walk you to your room after dark, since the lodge is smack in middle of the forest and, yes, you can hear the lions and other animals moving around in the bushes when you’re in bed). Well worth the trip and highly recommended. 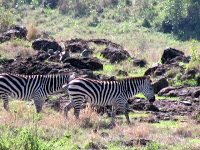 And what sights we saw! Stanley was thoroughly enchanted with the lions and the elephants and all the other animals we swy (although there are no giraffes in the crater, which seems odd – no one seems to know why), and the birds were pretty remarkable, too. As for myself, I was specially taken with the zebras but in my opinion even the animals couldn’t compete with the views (well, that’s pretty much of an overstatement, but you get my meaning). Even Stanley got pretty excited about the views as we drove around the rim of the crater and looked out over the vista. Pretty special.