Egerton Castle is a very special place for me. I can’t say exactly why, except that I greatly admire what Lord Egerton was able to do back in the 20th century, when he lead other settlers in Kenya in helping the local people. It was  his goal to figure out how to strengthen the country’s economic role by teaching the citizens about agriculture as a business (instead of limiting agriculture to small farms just for raising what one family required). It was a very noble effort, and it appears to have paid off handsomely, since agriculture is today the country’s primary source of income. 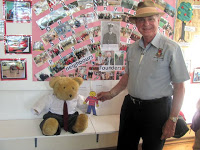 Remembering my visit to Egerton Castle back in October (you can read the post here), I knew I wanted to return for a couple of reasons. One, Mr. Andrew is a great lover of architectural history, and I knew he would like this place, as would the others in our safari. Also, since Ms. Nerisa has a connection with Egerton University, she was able to make special arrangements for a private visit and we would have a wonderful guide in Robert Onyiengo (76 years old), who had come to work at the place when the house was being built. So with her help, and that of Mr. Geoffrey, we got to the castle and started with a picnic on the grounds. 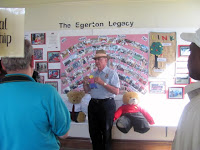 As for my second reason to return, I had noted in my first visit that the castle has a children’s room, a learning center where young people can learn about how Lord Egerton helped the people of Kenya (along with lots of family photographs about Lord Egerton’s family, both in Kenya and back in England), and once we had Flat Stanley on our safari, I wanted to be sure he got to visit Egerton Castle as well.

A special treat for Stanley was that in the children’s room he was able to make some new friends, since there was a group of Kenyan families visiting Egerton Castle at the same time we were there. So with all the cameras ready, we were able to take several photos, including one of me with Stanley in the children’s room and another as I was introducing Stanley to the other children and their families (I’m not sure they liked the idea of a little boy getting smashed flat, and Mr. Andrew had to explain that very carefully) and describing why Stanley has come on safari with us. Best of all, we were able to have a photograph of two of Stanley’s new friends, Valeria and Dorothea (with Mr. Guy grinning like an “I-don’t-know-what” – very strange!). 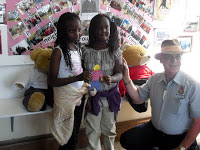 We got the impression from the girls (and their older brothers and sisters and their parents) that they were pleased to have met up with visiting Americans, and they were happy to have met Stanley and learn about his unusual circumstances. I was sorry I did not have an extra copy of the Flat Stanley book with me, but hopefully when the girls get to school they will ask their teachers to find it. Since English is required in Kenya (it’s one of the three official languages, the others being Swahili and whatever mother tongue is used in each person’s tribe or community), the book can be a good way for young people to be more familiar with English.