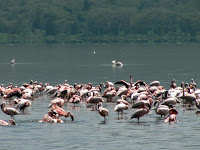 We don’t hear much about the flamingos in Kenya, and Flat Stanley got pretty excited when I told him that we could see thousands and thousands of flamingoes in Lake Nakuru National Park. I went there last year on a safari, and I was amazed at how many flamingoes there (I wrote about the park – and the flamingoes – in a couple of posts that you can check out if you like, here and here and here).

So when I told Stanley that we were going to see the flamingoes, he began to jump up and down and I got a little nervous because he can jump so high I was afraid a gust of wind would sweep him away. Stanley can jump even higher than the Maasai dancers we visited in Masai Mara (I’m not sure they liked that very much, and it seemed to make them a little nervous.

Going to Lake Nakuru and other places up in the Nakuru area was a big safari for us. Not only was it Mr. Andrew and Mr. Charles and I – just like the trip with Stanley to Masai Mara – we would be joined by Ms. Nerisa and Mr. Geoffrey – our Kenyan friends – and Mr. Richard and Mr. John, who had come from America to be part of the safari. So there was a big gang of us, and we got up very early to make the journey from Nairobi to Lake Nakuru, about three hours away. 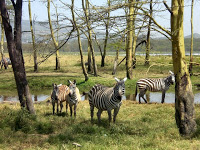 The experts tell us that there are more than 500 species of birds listed for Lake Nakuru, and you can believe it, because they are all over the place. But the flamingoes are the best (there are over 2 million of them at the lake at any given time!), and sometimes one whole section of the lake will be just totally pink with the colors of the so-called “Greater Flamingo” (there are also plenty of the so-called “Lesser Flamingo,” which are a tiny bit smaller and have feathers that are more white and less pink, if you’re interested in that fine distinction). They all mingle together at Lake Nakuru, along with a large number of pelicans, probably more than Stanley and I have ever seen in any one place in America.

A special treat at Lake Nakuru is also the mingling together of the zebras and the waterbucks. The latter is large animal, one of the large antelopes family, with a shaggy grey-brown coat. When they are mixed up with the striped zebras, as one of them is in this group of waterbucks and zebras looking at Stanley, it’s a very pretty picture.