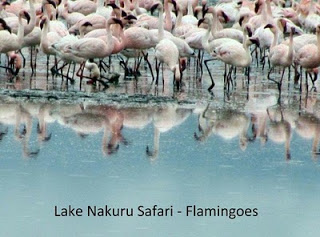 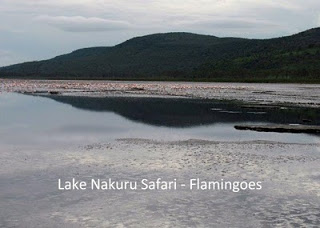 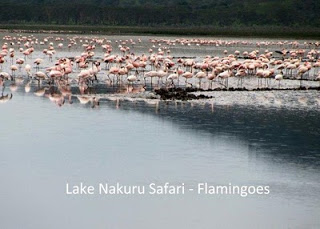 It’s hard to describe the beauty (or the numbers) of all the flamingoes at
Lake Nakuru. When I first started thinking about coming the Kenya, one of
the first things I learned about was the influx of flamingoes to Lake
Nakuru. And of course as I described this phenomenon to my two friends who
are – how shall we put it? – seriously attached to the flamingo as a bird
and as a decorative object in their homes, the idea of going to see the
flamingoes themselves and learning a little something about them became too
strong to resist.For people who are simply moderately interested in flamingoes (somehow that
spelling for the plural looks funny to me but that’s what’s in the books!),
you might like to know that there are two species: the greater flamingo and
the lesser flamingo (sort of reminds one of “St. James” and “St. James the
Less” in the Anglican churches, doesn’t it?). They all feed on algae and
some sort of microscopic things, and they are very sensitive to changes in
the environment which is why (I’m told) there are fewer flamingoes at Lake
Nakuru. Apparently with the shrinking lake – due to the drought – they can’t
get what they need and some are going elsewhere. In Kenya, the greater
flamingo (surprise!) is the larger of the two, but greatly outnumbered by
the lesser flamingo which is almost always much more pink, especially around
the bill. The birds are not always at Lake Nakuru. In fact, for many years more
flamingoes seemed to go to Lake Bogoria than to Lake Nakuru, but as it was
explained to me, that was primarily for breeding and then they would come
back to Lake Nakuru. Not being a bird-enthusiast (well, of the kind that
usually makes their way to this part of the world), I didn’t spend a lot of
time thinking about going to see the flamingoes at Lake Bogoria. Besides, it
is very hard to get to, and I suppose I’m just not that much of an
adventurer. It’s nice to know, though, that the flamingoes have somewhere
else to go if the algae is drying up at Lake Nakuru.In a way, because of so many flamingoes it is hard to focus on other bird
species at Lake Nakuru. I was also impressed with the white pelican, which
is easy to spot throughout the Lake Nakuru National Park. But it’s the
flamingoes which are so impressive. Somebody remarked that seeing them at
Lake Nakuru is probably the most fabulous bird spectacle in the world. I
don’t know about that, but I do know that seeing so many of them together is
pretty amazing, and even if this year there are a few fewer than the usual
(sometimes as many as up to 2,000,000 flamingoes!) crowding about the lake,
they are a sight to see.