Nairobi is well known as “safari central,” the place in Africa where most safaris go from, but what many people don’t realize is just how much safari-like pleasure can be found close at hand. There will be further descriptions later of two of the near-by highlights (the Giraffe Center and the Elephant Orphanage, both of which captured Stanley’s interest from the time we got out of the car), but the most satisfying site truly has to be the Nairobi National Park. 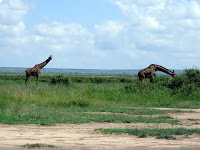 Just think about it: a huge park, full of wildlife, right at the city’s borders. Indeed, as you see here, an early morning game drive can produce not only an amazing variety of wildlife – especially the big cats as they are wrapping up their night’s chase and feeding, getting ready for lazing about in the sun – but the view in the distance is pretty amazing as well. It’s Nairobi’s cityscape, and as you are driven about in the park, it’s just hard to believe. Sort of like having Yosemite National Park or some such between my neighborhood in Manhattan and the Hudson River.

Like all game drives, a visit to the Nairobi National Park starts early, with your driver calling for you between 6.00 and 6.30 am, to get you to the park gate when it opens at 7.00 am. Unlike the rest of us, Stanley had no trouble at all getting up, as the animals he had seen in other parks and game reserves had him excited to get to the Nairobi National Park. He knew he wouldn’t be able to see any elephants (the park, at 117-sq-km – or 45-sq-miles – is too small for elephants) but he also had learned that just about anything else can be seen there, especially lions, rhinos, zebras, giraffes, and just about every member of the antelope family.

Stanley was not disappointed, and the rest of the group wasn’t disappointed either. While I had had several visits to the park during the time I lived in Nairobi, with my most exciting visit (which you can read about here) in early June, nothing that’s come before could compare with what we saw on this visit to the park. Within five minutes, it seemed, of coming through the gates, Mr. Charles (not only our driver but our animal spotter extraordinaire!) slowed the van down almost to a stop, turned off the engine, and whispered, “Lions.” And there they were, Mr. and Mrs. Lion just strolling along the pavement of the park road, paying no attention to any vehicles anywhere, and just relaxing as they began their day. What a sight! Here are a couple of the pictures, and there are a few more at the Flat Stanley in Kenya album (and there will be more photos later).

Not to be outdone, no sooner had we (reluctantly) left Mr. and Mrs. Lion than we came upon Mr. and Mrs. Rhino, the first of several we would see during the game drive through the Nairobi National Park. As one of the country’s most successful areas in terms of rhinos breeding, many of the black rhinos found in the park have been relocated from other areas. We were specially taken with this pair, though, since they seemed to willing to mosey about, not at all frightened by us, and not frightening to us either.