The wonders of this journey continue to amaze me, and seem to just keep coming on and on.

Having had such a lovely “final” day with my best friends last Sunday, planned as a sort of farewell until I return to Kenya in August, we expected our safari-ing to be over for a while. Or at least limited to our happy memories.

But then it turns out 1st June is a national holiday in Kenya, National Self-Governance Day (or something like that – I’m a little unclear about the translation of the Swahili word for the holiday: Madaraka Day).

So are my friends and I going to let a day off go to waste? No way.

And if we’re going to do something, we’ll do it right. We didn’t really want to travel, so we decided on Nairobi National Park, well known as the only game park in the world that is right next to a major city (literally). And to do it right, we decided to get there early, as we’ve learned the best time to see the animals.

So Charles arrived at my house at 6.00 am and we were well rewarded. As can be seen from Mr. Guy’s Nairobi Nat’l Park Album (1), we were treated to an amazing spectacle – probably historical, comparing to our first “historical” sighting at Masai Mara.

But first (not so “historical”) we had hardly arrived in the park before we saw in the road ahead of us that wonderful old Secretary Bird I’ve written about before. Fun to see her and re-new my acquaintance with her (one of the first species of wildlife I met when I came to Kenya).

Then we experienced something I had not seen before, the huge African buffalo carrying the big white birds. I don’t remember the name of the bird (although both Charles and Nerisa and even Justin tried to teach me – I just couldn’t get it!) but apparently this is a pretty normal occurrence when the grass is high. The birds apparently just think of the great bulk of the African buffalo as a sort of moving dining table, eating up the ticks that are already on the buffalo’s hide and grabbing all the other insects that are stirred up as the buffalo moves – like a great ship – through the grass. Amazing! Why I had not seen this before is a mystery to me, but it was pretty neat to learn about. 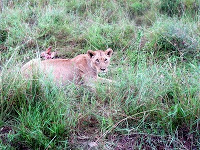 Then we came to the truly historical part of our morning. There by the side of the road, not five feet from the edge of the track, we found a huge lioness, well into the process of scraping the last flesh off a zebra remains (we could hear the gnawing, scraping sounds). We had missed the kill, which was too bad (although I understand it can be a pretty gory experience) and the main breakfast-ing experience, since she did not seem to be very anxiously devouring – you might say – the flesh from the bone. But it had been a big meal, for off to the right was the big male lion, having his after-breakfast rest, and then Charles looked along about 12.00 and saw a whole group of lions, so these folks had obviously had a nice big meal to start their day. 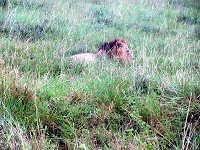 We were impressed, and of course we turned the engine off and just watched. The lioness, so close, was not the slightest bit intimidated by us, and in fact seemed to be eying us with considerable interest. Charles, who had left the drivers seat and quietly climbed into the back of the van to watch with us, noticed her looking at us and quickly calculating that with one big lunge she could leap into the van, made the smart decision to lower the roof to just a couple of inches. It meant that we had to sort of squeeze ourselves a little to see (and photograph) all we wanted to see, but it was a very smart move. Thank you, Charles.

Mama Lioness, totally unconcerned, turned her look away from us and went back to her gnawing, making sure she got all she wanted before she went away and left the bones to the hyenas (who, when they come, will eat everything that’s left, including the bones).

We could see, from the blood on the grass (all flattened now, clearly showing that there had obviously been a big struggle) that this was more than just one or two lions, and Charles – our resident counter – looked up to where the other members of the pride seemed to be resting and started counting. Some were down in the grass, but as they began to move about a little, wow! Eight of these guys, with only a couple of cubs.

Obviously we were fascinated, and we just sat and sat, watching as long as the lions were willing to provide us with a show. Eventually, though Mama Lioness got up and began to stroll away to join the others and after a while, so did Mr. Daddy. We watched the pride for a while longer and then went on, to see what else we might see.