[Despite the confusing title, I’m not back in Africa. Just continuing to posts stories and photos that are still with me, stuff I want to share.]

There comes the time….

The Tanzania/Ngorongoro Conservation Area part of our safari was a real mix. While the great pleasures had to include a few awkward and tense moments – due to differences of opinion between me as the leader of the group and the third-party driver engaged to work for us – the pleasures of the journey made us very reluctant to leave. We could have had another couple of days at the Ngorongoro Crater.

As we left, we found ourselves speaking most about the views, for as you can see from the photos (at Ngorongoro Crater (6) – Leaving Tanzania), the countryside truly is worth seeing, and worth remembering. I continue to be so impressed with the natural beauty of Africa, and while my focus during the year I was in Africa necessarily (and by choice) was on Kenya, even I will admit that the beauty of the scenery in the Ngorongoro Crater and as we drove back to Kenya was impressive. 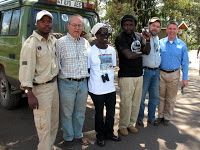 The roads…. Well, I’ve already said enough about travelling in Tanzania, and while there are some sections of paved roads, we just try to overlook (and forget about) the rest. We did have fun stopping along the way, and as we made our egress and re-entered Kenya, of course, there were happy and light-hearted moments. We were a very happy safari group when we pulled into our guest house in Nairobi eight hours after we had left Ngorongoro. We were happy to be home.