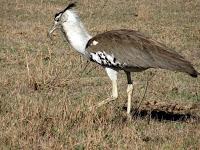 As we drove about on the crater floor, I was very surprised to see so many birds. Not just the usual flocks flying about, but a great many that seemed oddly out-of-place. For example, we had experienced the famous flamingos at Lake Nakuru National Park, where there are so many that the water sometimes seems pink with the hundreds of thousands of flamingos feeding on the water and flying about (previously reported on here ). There were quite a few of the flamingos flying about in the Ngorongoro Conservation Area as well, and like at Lake Nakuru, the flamingos were joined by the pelicans, looking very proud of themselves for being part of the bird picture at the Ngorongoro Crater.

There were other birds, in profusion, and it’s at times like this that I’m sorry I’m not a birder. I don’t know why, but for some reason I was never much exposed to the study of birds (and I’ve always been a little in awe of my European friends – particularly people in the U.K. – who are so good about taking their children on long walks across the countryside to teach them about all the birds they see). It would have been nice to have had a little more background in the subject, and as it turned out, most of my safari companions were in pretty much the same situation. Nevertheless, even though we often didn’t know what we were looking at, we appreciated the beauty of these wonderful creatures, and seeing them so free in the Ngorongoro Crater made us very happy. We had fun taking photos of some of them, which can be seen at Ngorongoro Crater (4) – The Birds.