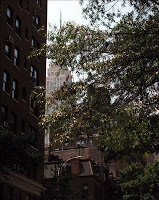 The title is a bit off, for these thoughts are not an extensive commentary on life in New York. Nor is this to be the first of one of those “notes-on-living-in-the-big-city” series of essays. This is simply a brief excursion into an appreciative few words about where I live and why I – like so many New Yorkers – take such special pride in living in one of the world’s great cities.

The motivation is not hard to understand. After a ten-week hiatus from the international travel – complete with a couple of family vacations, an international professional conference (in America, not somewhere else!), and some extensive professional work from the New York – it appropriate to respond to the requests of several international colleagues, who keep asking what life is like in New York and, especially, what my neighborhood looks like.

So as I head off for yet another assignment away from home, it seems appropriate to think a little about where I live and what the physical neighborhood is like. So for those who have not visited Mr. Guy in New York, there will be (probably sometime in the autumn) another of Mr. Guy’s photo albums, this one focusing on New York. Needless to say, my amateur shots are not at all expected to be in competition with the beautiful professional New York photographs of my friend Antonio Martin, featured here a few weeks ago. On the other hand, since I live here, I hope to give non-New Yorker friends a sense of life in New York as I live it.

In the meantime, though, here are a couple of tempting photographs just to show where we live. The photograph above is the view from our house. The building where we live is an apartment house now – with seven flats – but when it was built in the 1870s the house was designed for a single family. New York in the 19th century was in its full progress of moving uptown from lower Manhattan, and Murray Hill became a much-beloved middle class neighborhood. Houses like the one in which our flat is contained would probably have been the home of a merchant or professional person, with his place of business over on Fifth Avenue, two blocks away. 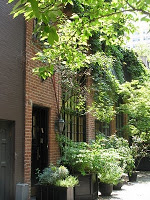 And yes, as you look at the photo and glance over the adjoining buildings, that is the Empire State Building towering above. Located at Fifth Avenue and Thirty-Fourth Street, the Empire State Building is a true landmark, a New York icon. Even after living in this neighborhood as long as we have, it’s still a bit of a thrill to walk outdoors and see that marvelous structure up over us.

The second picture is another little temptation. It’s a pretty place, but not particularly typical (not many of us live in little houses like these). Now a lovely group of well done-up homes, Sniffen Court was originally the stables for the people who lived on Thirty-Sixth Street. This is the view we see when we leave our house, when we turn in the opposite direction from the Empire State Building.