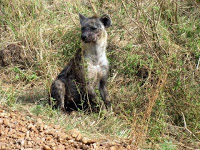 One of the pleasure of the migration safari is the opportunity to see again some of the favorite animals, who now cohabit in the Masai Mara with the migrating animals (mostly wildebeests and zebras and some of the antelope family). As I’ve written, the numbers are amazing, but even as we observe the usual residents, there are some unexpected delights. And sometimes a frightening surprise.

For example, on one of our early morning game drives, we came upon a group of spotted hyenas, all very comfortable and relaxed and one of whom was not at all nervous about being right next to the road where we were driving. These guys weren’t looking for breakfast (a not-unusual situation during the migration, as I’ve said) but they seemed particularly self-satisfied.

Then our speculation kicked in, for down the road a ways (as you can see in the first picture of the Migration Safari – Various Animals Album) we saw a stalled vehicle. As we approached, after we had left the spotted hyenas, we could see that the car had a broken axle, with the front wheels totally askew. So of course the wicked imaginations of the Great Four Safari Team kicked in, and for quite a distance we had considerable conversation about the possible sequence of events: a broken axle early in the morning, hungry animals wandering about looking for breakfast, inexperienced tourists (probably on a self-drive safari, not recommended) getting out to survey the damage…. You get the picture. 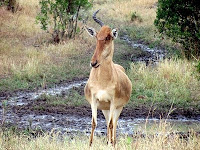 But we saw no signs of struggle and eventually decided to get the conversation back to more realistic comments, and spent the rest of the morning looking at a vast array of animals. And finding some unusual ones. This one-horned hartebeest, for example. Much speculation about why he has only one horn. A fight with another animal? A birth defect? An accident of some sort (and if so, why so evenly cut off)? Lots of things to speak about on safari. And of course always continuing to be amazed at the numbers of animals. So many animals enjoying the good grass!