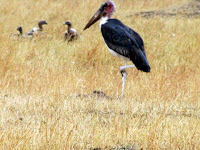 In most of modern society, it’s relatively easy to look the other way and avoid references to death, especially in the animal kingdom. We don’t hear much about the demise of animals in the wild when we drive along a mountain highway like the Blue Ridge Parkway, or when we are travelling through one of the empty landscapes of America’s great Southwest (unless, of course, something runs out on the interstate highway in front of us, and then we give the animal our full attention!).

On safari, though, the subject of life and death becomes a constant theme, and sometimes, when there are children to tell safari stories to (like one’s grandchildren), there’s a little confusion when one has to describe how natural and “normal” it is for the predators to seek out other animals so they can feed themselves. And since the animals they feed on are often beautiful zebras and other graceful animals (like the gentle antelopes), animals that children have come to think of as cuddly and “sweet,” it gets a little difficult to talk about the wild chase that goes on when the lion or leopard is running down one of those pretty animals.

But that’s the way nature is, and the point is very well made when one goes on the migration safari. With so many, many animals, there are often the remains of a kill just left in the field – or near the road – since the big cats have plenty of food (especially in August, when so many animals have made it across the rivers – even the crocodile-infested rivers – and there are hundreds of thousands of animals all over the place). At this time of year, the predators aren’t particularly rushing to get their next meal, since they are already well fed.

But predators aren’t the only cause of death in the migration. Again, it’s the numbers, and with all those animals, some must simply have died, perhaps of old age, or fatigue, or simply of some illness (My driver Charles has become very adept at spotting a lone animal – especially a wildebeest or African buffalo – and determining that it is ill and has gone off by itself to die). There are plenty of dead animals around.

Animals also drown, a sight that surprised us when we made it to the Mara Bridge. It was a little sad to discover so many vultures and Marabou Storks sitting around on the rocks or on the edge of the water – themselves well fed – and then to see how many corpses were floating about in the river. It’s just a matter of averages, I suppose. Among all those wildebeests and zebras, some must have simply drowned when they couldn’t make it up the high cliffs on the other side, or they were just too tired to make it across.

So on safari, one is never far from death (as was certainly the case when my friends and I came upon the eight lions and the remains of their kill back in June). Viewing the migration, the safari-goer is going to be exposed to death even more often, to the extent of noticing that just in driving along the dirt roads and the tracks of the Masai Mara, one gets a frequent whiff of rotting flesh. Not enough to be disturbing (after all, we are in a moving vehicle) but there’s enough of it to make one aware, which isn’t usually the case when one goes on safari at other times of the year.

It wasn’t always so easy to take. Many visitors to Africa – especially if they enjoy linking up to the “olden times,” as one of my friends calls Kenya’s early days – find time to read one of the classics of early exploration. Col. John Henry Patterson’s The Man-Eaters of Tsavo tells the curiously fascinating story of the fight against the lions who attacked the camps of the railroad workers, carrying off men to eat for their evening meal. And the odd thing is that, as with the purported two-and-a-half millions animals of the migration, the large numbers seemed to make the horror of the experience somewhat less horrifying. Here’s Patterson describing what he found in the camps, shortly after he came to be in charge (this was in 1898, as the railway from the Indian Ocean to Uganda was being built):

“…the camps of the workmen had also been surrounded by thorn fences; nevertheless the lions managed to jump over or break through some one or other of these, and regularly every few nights a man was carried off, the reports of the disappearance of this or that workman coming in to me with painful frequency. So long, however, as Railhead Camp – with its two or three thousand men, scattered over a wide area – remained at Tsavo, the coolies [sic] appeared not to take much notice of the dreadful deaths of their comrades. Each man felt, I suppose, that as the man-eaters had such a large number of victims to choose from, the chances of their selecting him in particular were very small.”

I doubt that the wildebeests and zebras and antelopes think about it like that, but there probably is some instinctive sense of security in their large groups. Gives new meaning to the idea of “strength in numbers,” doesn’t it? 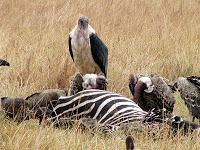 Probably the only time we saw an unnerving death scene was when we came upon the corpse of a zebra, all surrounded by the big vultures and the Marabou storks. It was a pretty nasty site, but we were careful to keep the photos for this album (Migration Safari – The Naturalness of Death) from being gory. Usually after a kill, it’s a lot cleaner, since the predator and his/her clan will eat most of the flesh. When the cats are finished, the vultures and the Marabou storks will come in to pick the bones pretty clean, to be followed by the hyenas, who with their strong jaws will simply eat everything that’s left, bones and all.

That sequence didn’t seem to be the case here, and, again, it was probably because there was such an abundance of flesh to be eaten. We had the vultures, and from my limited experience I figured it was probably the Lappet-faced vulture, who along with five other vulture species can be seen hanging around when there’s been a kill (or in this case, as my friends and I suspected, simply a natural death). The big guys here – even bigger than the vultures – were the Marabou storks. That one is a real scavenger, and one authority describes how the Marabou – and the vultures with whom it hangs out – have naked heads and necks simply because their bodies have adapted over the years, since having feathers would get a little messy when the head has to dig into a large corpse to eat. Thankfully we did not get close enough to inspect their heads.