Of the three operas I heard at La Fenice last May, the one I will not forget is Bellini’s Norma.

When I arrived at La Fenice, all of Venice, it seemed, had crowded into Campo San Fantin in front of the opera house. They were there to honor soprano Mariella Devia, who was singing the title role in the opera. While I had read about and many times enjoyed Bellini’s splendid opera (one of the finest operas in the repertory, in my opinion), I had never heard Devia sing the role. Thankfully that loss was made up by the wonderful performance I heard that evening.

As we entered the opera house a little before 7pm – the Sunday-evening starting time at La Fenice – I could sense that something special was going to happen and while I don’t read enough Italian to have read in the papers that the evening’s program would be a news event, it was clear that this would be an evening to remember. As it happened, the couple sharing the box with me (and with a Japanese lawyer studying Italian law in Rome, who had come to Venice for the occasion) starting chatting with me as soon as I was seated. They were Venetian natives, opera-goers all their lives, and by the time the curtain went up, I was sufficiently informed (and sufficiently excited) to be glad to be where I was that night.

Mariella Devia has been singing a long time (but you wouldn’t know it from this performance). Her stage debut was in Lucia di Lammermoor in 1973. She quickly became very popular throughout Italy, making her La Scala debut in 1987. And while conquering opera in her own homeland, she traveled with her performances, coming to New York to sing at the Metropolitan Opera from 1979 to 1994. And she continued traveling and singing, to the Paris Opera, to the Aix-en-Provence Festival, and to the Royal Opera House in London in 1988. She became associated with the Pesaro Festival for several years and with the Festival della Valle d’atria in Martina Franca, where she worked with long-neglected operas by Rossini, Donizetti, Bellini, and other bel canto composers. As for Norma, she sang the role for the first time in Bologna in 2013, just five years before I heard her, and she was celebrated with much praise (and with much notice, as it was the day after her 65th birthday). In my opinion, that performance couldn’t have been much different or any less excellent than the performance I heard last May.

Needless to say, after the performance the ovation on that Sunday night in May was nothing less than overwhelming (and even I – opera enthusiast that I am – began to wonder if people in the audience would ever sit down, or if the shouting out of “Regina” would ever stop!). It was all worth it, of course, and as the applause finally began to lessen a little, she was joined on the stage by Fortunato Ortombino, Superintendent of Teatro La Fenice. He did the honors for the occasion, announcing that she was being awarded the “Premio Una vita nella musica 2018,” joining the impressive list of performers and scholars who have received the prestigious award.

And that leads me to describe my second reason, my real reason (as I had not been aware of the special nature of Mariella Devia’s presence prior to coming to the opera house) for attending this performance and why I would not forget attending Norma this night. I knew about and had eagerly anticipated the production for it was under the design and staging direction of Kara Walker, a remarkable artist who lives in New York City and has taught extensively at Columbia University in the City of New York. Her Wikipedia entry describes exactly why she was the best choice for designing this Norma:

Walker is best known for her panoramic friezes of cut-paper silhouettes, usually black figures against a white wall, which address the history of American slavery and racism through violent and unsettling imagery. … The black and white silhouettes confront the realities of history, while also using the stereotypes from the era of slavery to relate to persistent modern-day concerns. Her exploration of American racism can be applied to other countries and cultures regarding relations between race and gender, and reminds us of the power of art to defy conventions.

Walker’s participation in the production was described by Shelley Rice in Africanah.org (May 17, 2015), who notes that Walker was working with the 2015 Venice Biennale when Okwui Enwezor commissioned her to do the stage direction, set design and costumes for La Fenice’s Norma. Already on the schedule for late May and early June, the work was a collaboration between the Biennale and the Opera House. 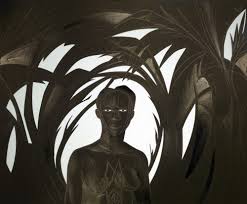 Helmut Putsch in Opera Online (May 26, 2015) noted that in the production (and it’s the first thing we see as we go to our seats), the opera begins with a big green portrait of an African woman, looking directly at the audience as they walk to their seats:

Once the curtain is lifted, we see a big dark woman head mask over the whole width of the stage, her nose and lips forming a hillside landscape. The background is filled with dark cuts being illuminated in various light shows, creating different natural environments and settings. Gallia is transfered to Africa and has become an African tribe, their ruler Oroveso is a proud chief in a leopard dress with an elegant stylish hair cut. … The Romans are transformed to western colonists with their Safari outfits. As there is not much [in the way] of gestures and movement on stage, the evening does not develop excitement and tension but remains as a series of beautiful natural images accompanied by the music of Vincenzo Bellini.

I disagree with the tone of the review, but that’s not a big deal; it happens all the time when audience members read what critics write. And no matter what one thinks of the immediate “look” of a production, it is clearly evident that what Walker and Devia and everyone else connected with this show did makes for amazing and dramatic theatre.

And for us to understand just how dramatic, let me share with you some of what Kara Walker wrote in the opera’s program book. She called her essay “A Black Norma,” and as she makes her case for the “why?” of her decisions, the astounding effect makes perfect sense as we try to match what we are seeing and hearing with what is happening today in our lives – personally, locally, and globally.

Walker begins by referencing Conrad’s Heart of Darkness, telling of Marlow’s thoughts as he looks about while his ship is anchored in the Thames and he looks out on London, reflecting aloud on the courage an imagined Roman soldier must have felt upon being “ordered suddenly to the north; run overland across the Gauls in a hurry […] Imagine him here – the very end of the world […] They were men enough to face the darkness.”

It is with this in mind that I have reset Norma. Instead of Roman occupied Gaul in 50 B.C., we enter a late 19th Century West or Central African colony not unlike Gabon or the Republic of Congo, occupied by a European power. This is an imagined place along the Ogooué River, populated by a strong community – devotees of a religion of nature – overseen by the elder Oroveso, and his powerful daughter, the Priestess Norma. It is to these two the community relays their extreme wish to overthrow European colonial rule, represented by Pollione the Proconsul and his attendant, Flavio. I could not help but reflect further upon Heart of Darkness; Conrad’s descriptions of colonial officers whose political and economic purpose has devolved into petty self interest and dark brooding. Pollione’s interest has turned to conquering women – chiefly the virgin Adalgisa. Pollione is modeled loosely on Italian explorer Pierre Savorgnan de Brazza, whose great physical charm and lack of violence opened up the western bank of the Congo to France to what is today the Republic of Congo.

After a few other thoughts and thought-provoking comments, Walker wraps up her essay with a dignified and electric conclusion:

Through colonial conquest, African masks and ideas about simplified forms were taken to European capitals and viewed by western artists of the early modern era. Modern abstract art can be viewed as a direct descendent of this trade and misappropriation of African gifts. And likewise my Norma might be viewed as a misappropriation of European gifts.

Beginning with a colonial era image I saw in my research of an intense and poised young Congolese woman. She is my Norma, unconquered and unclothed, and from her flows the landscape and life. All my questions related to black women’s bodies on stage and the depiction of skin, the presence of nature and the difficulty of clothing blackness in a European romantic art form stem from this one image. Nowhere is this woman “depicted” in the story, and yet she is the guiding force for me in my set and direction of Bellini’s opera.

Yes, I think I can safely say that this is an opera performance I will never forget.