We woke early to begin the long journey to Nairobi, going a different route than when we came to Kisii.

For the first drive, we came via Lake Naivasha, using much the same route we had used on some of our previous safaris, to Lake Nakuru and Hell’s Gate, and taking us over the mountains of the eastern side of the Great Rift Valley, from which we again enjoyed the spectacular views (with the photos previously posted back at the end of December).

For this journey, we turned left from Nakuru to cross the Great Rift Valley, which we would cross again on the way back but on a more southern route, going through the Maasai country (which I’ll visit again when I have my big safari in mid-May to the Masai Mara National Park, Kenya’s largest – and full of all the animals I want to see). 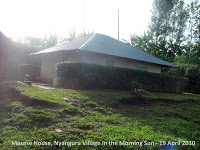 Our day began early, with an early-morning farewell to Charles’s and Jane’s house in Nyanguru Village, seen here in the morning sunlight and the cool fog that seems every morning to cover the upper reaches of the mountains (high hills?) where the villagers make their homes. Charles took the photograph, and it is a lovely view of the beautiful house that he has built for his family.

Out of Kisii, we drove along a long highway, again going up and down the mountain road and, as I’ve commented before, the road often left much to be desired, especially when Charles had to compete with some of the big lorries (trailer trucks) coming up or going down the mountains. The matatus as well – those amazing privately owned but public transit vans used by just about everybody when the walk would be too far – give any driver tremendous competition and there are quick a few heart-stopping moments on the country roads (especially in the mountains) as the matatus weave in and out of the traffic, with no indicators blinking, and just pulling out or cutting in as the need arises. Worse in the cities, of course, but pretty dangerous out in the countryside as well. Scary!

And while we were unable to get to Lake Victoria this trip, we did have one spectacular view of this huge body of water, which I tried to capture in one of  the PHOTOGRAPHS. After a distance, we then turned on to the highway that would take us back to Nairobi and this was a totally different travelling experience. For one thing, it’s a very good highway, much safer and much better kept up than the previous highway, and since it was now mid-morning, there was not a great deal of traffic. I tried to capture some of the views of the huge flatlands of the Maasai countryside, and I’ll try to get some more of this sort of view when I have my next trip there. It’s all farmland, with herds of cattle everywhere, plus amazing crops under cultivation. Lots of goats and sheep, all intermingled into the same herds (which I had not thought about before – I just assumed they would be separated, as the cattle are), and long, long distances to view.