The longer I am in this beautiful country, the more impressed I am with what a wonderful place it is. My driver Charles and I had planned a safari to Western Kenya for some time (since long before I went away on that massive journey to Europe and America and South America). We chose the site for a couple of reasons. For one thing, I wanted to go in a different direction from some of my earlier travels, and it seemed like a good idea to head off across the Great Rift Valley and see if I couldn’t see a part of the country that was a little different.

And a second reason for the journey was to visit Charles’s home and his family in Kisii. I had heard much about this lovely place, both from Charles and from other Kenyans I know in Nairobi, so my curiosity was piqued.

So that’s what we did. With Charles’s son Justin accompanying us, we took off early of a Friday morning for the long drive. But first we had to stop at the Sopa Resort just outside Lake Naivasha for a quick meeting with some of my U.N. colleagues – who were on retreat there and had me come by for a brief presentation, since it was on our way anyway.

And why not? Little did I know that our brief stop at the Sopa (I’ll be staying at the Sopa Resort in Masai Mara, when I take that safari in mid-May) that it would be a preliminary of the rest of our journey, for the first thing we saw as I got out of the car were the monkeys! They were all over the place, so while I did my presentation, Charles and Justin took the camera and had some fun, with this first picture a delightful way to open the album.

After a long drive over the mountains and across the Great Rift Valley, we came to one of Charles’s favorite places, the great tea plantations of Kericha, where we spent a long afternoon, enjoying the views and a nice leisurely luncheon at the famous old Tea Hotel (another taste of the grand old colonial days). 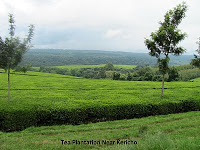 What most impressed me, of course, was the scenery. The photos are unloaded here, and as you can see, tea is everywhere. I had done a little research, as I was wondering about the weather conditions and it’s easy to understand why the Kisii area is such a huge part of the Kenya agricultural economy. The sun shines – often quite hot – for most of the morning and into the late afternoon or early evening, and then the heavens open up, with wonderful, earth-soaking downpours. It really is quite spectacular, the weather in that part of the country (and yes, you have plenty of opportunities to get wet and often, pretty muddy as well, depending on where you have to walk!).

As for the tea, well, it’s a mainstay of the economy and in fact Kericho is sort of built around the tea. There’s no real “season” (as we reckon these things in the West), and the tea plants just grow, getting trimmed back to the ground every so often. The tea leaves must be harvested at a very particular time – usually I understand after the leaves have been maturing for 7 to 14 days – and it’s an amazing spectacle to see all the workers out in the field, picking the leaves.

So we stayed for a while enjoying the scenery and then headed on towards Kericho and the Tea Hotel. The photographs don’t lie: the grounds really do look like this, and the flowering trees and plants and, well, just everything about the place was just beautiful to see. (OK, the food was pretty ordinary but we weren’t there for the food, were we?) And after we had our lunched, we strolled about the grounds for a while and that’s when Justin pointed out that our day had been sort of complete. We had started out with the monkeys at Sopa Resort and now the back garden of the hotel was just full of them. I hope they can be seen clearly in the photo album (I think it’s best seen as a slide show, but that’s just my choice).