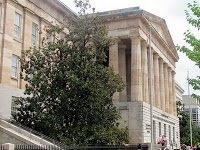 A recent business trip took me to Washington, DC, where I found myself with a little time to kill between meetings. As often happens, I took myself to one of the city’s splendid museums.

We Americans seem to take for granted the great treasures that are available for us in our nation’s capital, and one of the delights of visiting Washington is to visit all the fine museums (and – since they are national museums – being charged nothing to enter and stay as long as you like).

This time, I decided to return to the Donald W. Reynolds Center for American Art and Portraiture, named for the museums’ largest donor. A few years ago, the government restored the long-unused U.S. Patent Office, one of America’s best examples of Greek Revival architecture. Design and construction of the building began in 1836, and some call it “the noblest of Washington buildings.” That point might be debated, especially when one tours the great and equally splendid National Building Museum, just a few steps away, but it’s not a point worth debating. The old U.S. Patent Office is a treasure, in every sense of the word.

The restoration came about because government leaders saw an opportunity to put the magnificent Smithsonian American Art Museum and the National Portrait Gallery both under one roof (hence the somewhat cumbersome official name). And while we all go there for the collections and the wonderful changing exhibitions, I take particular pleasure in going just to look at the architecture and trying to imagine what it must have been like in the 19th century. President Lincoln’s Inaugural Ball was held there, in what is now called Lincoln Hall (of course!) and which now displays contemporary art. The delightful juxtaposition of contemporary art with what must have been a once-in-a-lifetime experience at that ball makes for a joyous visit indeed.

And contemporary takes a very special turn with one of the current temporary exhibitions, “Remembering the Running Fence,” a major early project by Christo and Jeanne-Claude. Visiting Running Fence, Sonoma and Marin Counties, 1972-1976 is a fascinating experience, heightened greatly by three films about the project currently on view at the museum, “Running Fence” (1978), “Running Fence with Commentary” (2004), and “Running Fence Revisited” (2010). While I cannot show any photographs here, the fact that the Smithsonian American Art Museum has acquired and has selected for view items from the project’s archives (the work was 24.5 miles long, with one end dropping down into the Pacific Ocean) is an occasion for great joy. And as for the motivation, the drivers for Christo and Jeanne-Claude’s work, the why? The question is answered in one of the films by Jeanne-Claude: “It’s only a work of art. It has no purpose.”

So there are no photos of Running Fence (although there is more information at the Running Fence entry on Wikipedia). But in the photos I did take (at Mr. Guy’s July Museum Visit Album), I tried to do justice to the building itself. And there are a few photos of some of my favorite portraits.

This museum is worth a visit to anyone visiting Washington.