All the pleasures of the New York summer are not necessarily in the city. A celebration for a recent Sunday birthday provided the opportunity for a drive up the Hudson River. So off we went, heading up to Hyde Park, about 90 miles north of the city. 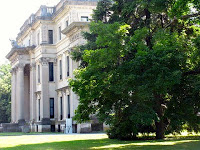 Although the name “Hyde Park” is connected in most people’s minds with the site of Franklin D. Roosevelt’s home (“Springwood”) and the FDR Presidential Library and Museum, the actual property with that name was the land on which Frederick William Vanderbilt (1856-1938) built his beautiful home in the late 1890s. Married since 1878 to Louise Anthony Torrance, Frederick built the new house when the Greek Revival house on the grounds needed to be replaced (it was apparently “structurally unsound”).Commissioning Charles Follin McKim of McKim, Mead, and White to plan a 50-room home that would match anything the European aristocracy might be inhabiting across the Atlantic, the house when it was finished turned out to be one of the most modern – and stunningly beautiful – houses of its day. The interior decoration and the purchase of the furnishings was turned over to McKim’s partner Stanford White, who traveled to London, Paris, Florence, Rome and Venice in 1897 to acquire what Frederick and Louise needed for their Hyde Park home. It is said – possibly apocryphal – that the furnishings costs more than twice as much as the building itself.

The mansion is situated on some 200-plus acres (originally more than 600 acres when Frederic and Louise bought the land). The mansion and the grounds were primarily used as a vacation home for Frederick and Louise and their many guests. A staff of 60 or so kept up the house and gardens and Louise – a lady who loved flowers – would sometimes have, it was said, more that 100 bouquets in vases throughout the house when she and Frederick and their guests were in residence.

Louise died in 1926, and after her death, Frederick lived out his life in the mansion. When he died in 1938, the estate went to Louise’s niece Margaret Van Alen. She told President Roosevelt the next year that she wanted to “keep my place as it is – a memorial to Uncle Fred and a national monument.” The 211-acre site has been open to the public since 1940. It is a National Historic Site, with well-trained park ranges conducting informative tours for visitors. The interior of the house, except for some personal belongings, is arranged as it was when Frederic and Louise lived there.

For our family excursion, accompanied by our friend Nerisa Kamar visiting from Kenya, we had the full experience of the grounds and the very satisfying tour of the history of the interior of the mansion from the knowledgeable park ranger. Not surprisingly, flash photography isn’t allowed inside the house, but the lighting conditions were good for one artifact I particularly wanted to photograph, one of a pair of ruby glass lamps (at one point in my life I collected ruby glass). So the photographs (you can see them at Vanderbilt House) are mostly outdoor photographs with the emphasis on the scenery, the splendid Beaux-Arts architecture (considered by many to be one of McKim, Mead, and White’s finest residential projects), and photographic memories of our family’s splendid day out.