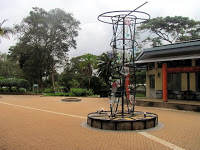 A recent Sunday provided three of The Great Four (Geoffrey couldn’t join us) an opportunity to have a day out, spending lots of time doing things we had wanted to do but had not been able to fit into the schedule. It was a sort of gloomy day anyway, so we decided to take on activities that would mostly keep us indoors, starting with church (hence the way we are dressed).

Our first stop was a long-delayed visit to the Nairobi National Museum (see a selection of photos here). The flagship museum of the National Museums of Kenya, the Nairobi National Museum was started in 1910 by the then East Africa and Uganda Natural History Society. In those days, the organization was mostly colonial settlers and naturalists who wanted to keep and preserve their collections of various specimens, and that’s the sense that comes through, especially when you look at some of the older collections. The bird collection is definitely dated in its style and presentation, but it is so comprehensive you just don’t think about that. It’s an amazing collection (and I’ve just offered a tiny sample in the photos).

The Great Hall of Mammals is quite spectacular (and a neat spot for some close-up pictures with some of the animals you dare not get close to on safari!). Also great fun (and a unique learning experience) is the Cradle of Humankind exhibition, with a reconstruction of how human beings lived millions of years ago. A recent addition (and behind very secure doors and a two-doored walkway) is the collection of skulls and skeletons from early mankind, deposited at the museum from Louis Leakey’s Centre for Prehistory and Paleontology from the days when he was the museum’s honorary curator (1941-1961). Very impressive indeed. 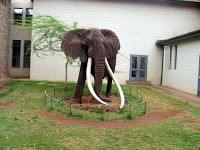 And for fun, perhaps the most visited exhibit is in the museum’s courtyard: Ahmed the Elephant. He is enormous and has those fabulous, long tusks. Actually, what’s on display is a replica of Ahmed, to bring attention to the the famous tusker who was put under armed protection in the 1970s to demonstrate Kenya’s commitment to eradicating poaching (and connecting with the beautiful memorial at the National National Park).