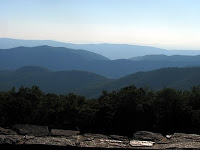 The Internet is awash with vacation photos and ours might as well join the flow. It’s summertime in America, and for colleague and friends throughout the world, this is a delightful opportunity to share views of what we see as we drive about our great country.

This particular family holiday began with a drive from New York to Virginia’s lush Shenandoah Valley, especially green and lovely this year, since there’s been so much rain (but none on our journey, thankfully). The Shenandoah National Park has been around since 1926 (fully established in 1935) as a peaceful refuge for Americans and visitors. According to one guidebook, “the creation of the park has allowed natural forces, combined with the efforts of the Civilian Conservation Corps, to regenerate an area of scenic mountain terrain.” Now celebrating its 75th anniversary, the park is one of the many products of the great CCC, one of President Franklin D. Roosevelt’s famous solutions to the Great Depression, to provide work for the millions of Americans who could not find work. 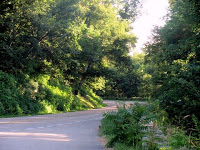 The best way to see the Valley, of course, is from above, and splendid views are available from on high – from near Winchester, Virginia (not far from Washington, DC) via the Skyline Drive, the Shenandoah National Park’s scenic roadway which follows the crest of the Blue Ridge Mountains for 105 miles. At its southern terminus, the Skyline Drive connects to the Blue Ridge Parkway, which stretches 469 miles to the Great Smoky Mountains National Park. For our holiday, we left the Skyline Drive at its endpoint, spending the night in Staunton (pronounced by Virginians as “stan-ton” not “stawn-ton”), and continued on the next day, via the Blue Ridge Parkway, to just beyond Roanoke to visit one of the St. Clair relatives, a childhood friend and music mentor (more about that later), and to re-visit family landmarks and the family cemetery.

But the point of this post is to lure readers to look at the fabulous views we saw along the way. These are captured in Mr. Guy’s Shenandoah Album.