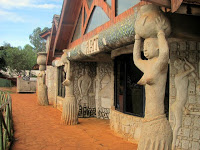 Not being an expert in the fine arts, I’m somewhat at a loss as to how to describe some of the things I run across in my travels. And I have to admit that even with that caveat, I’m a little challenged about the art work I found in one section of the Crocodile Farm in Nairobi (the Nairobi Mamba Village).

It is the facade of a building that – I gather – once housed an art gallery and gift shops, but now it is totally abandoned and even gives off the air that the inhabitants left in a hurry (perhaps the crocodiles got loose one night?). Even the gift shop still has many items inside, all covered with dust, sort of as if in an old-fashioned “ghost town” one sees from time to time in the American West.

Whatever its purpose, it’s not a small building, and it is spread out over a good-sized area, and mostly one floor, although one can discern some second-floor space at some sections). But what fascinates me and my friends, as you can see from the photographs, is the artwork fashioned into the facade of the building. It’s a little of everything, depicting African historical themes, considerable early-history warfare (I presume tribal, although one conquering warrior seems to be in Arabic dress), wildlife, what appear to be legends or narratives of one sort of another, and a depiction of ritual circumcision. Someone put a great deal of thought and labor and talent into the creation of this facade, and the whole work is quite charming. 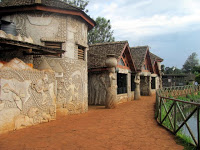 Not surprisingly, we were very distressed to see the condition of the facade, and who knows what will happen to it? Whatever the fate of the art, seeing it is definitely a once-in-a-lifetime experience. While some of the photographs give some idea of what it looks like, the facade also appears destined to be a thing of the past, since I don’t have the sense that it is cared for or will have any future. I think the medium is poured concrete, molded before it set, but it could be anything (again, I’m not an expert in these things). No matter. As a fascinated thing to view this art work is a real treat, and if it disappears, that will be too bad.