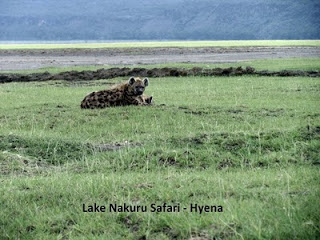 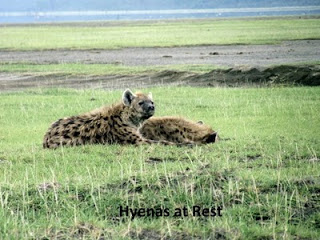 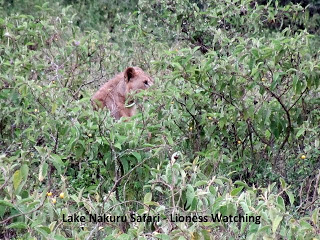 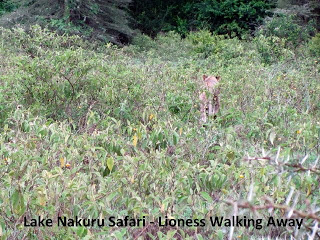 Some folks might think a national park would be too tame to see much action,
but there is no doubt that these animals would be dangerous if you saw them
at the wrong time. By the time we ran across the hyenas, it was early
afternoon and they were just resting in the sun, having had their mealtime
adventures the evening before or at the latest, in the early morning. So
these guys weren’t too interested in running after food, but it wasn’t going
to be long before they would start to get hungry. I have to admit that the
looks they gave us as we stopped on the road weren’t too friendly. If we had
been a little closer, they might have started thinking of us as their
appetizer for the evening meal.There are two types of hyenas in Kenya, I hear, the spotted hyena (which we
saw on our safari, pictured here) and the striped hyena, which I’ll probably
see when I take my big safari to Masai Mara in the late spring. They are big
dog-like creatures, and the female is usually larger than the male. Hyenas
are hermaphrodites but only one set of genitals is dominant (which is how
the scientists can tell the males from the females, I suppose). Their
so-called “laugh” is what they are most famous for, but in fact it is not
nearly as distinctive – or as frequently heard – as a sort of whooping sound
that you hear all the time in Africa after dark, if you’re near the wilds.One of the great goals for safari travelers is to see (and check off their
list) the “big five.” It’s kind of a silly game, really, and doesn’t really
mean a lot to a lot of people, but it makes for a lot of fun on a safari
where there is a group traveling together. Good conversation and some
healthy competition – and I’m still smarting from the disbelief of my safari
companions in Kruger Park in South Africa lo these many years ago, when
everyone else in the Land Rover was dozing and I – and only I – saw my
leopard on a branch in a tree next to a dry river bed. I looked right at him
as he was waking up from his own afternoon nap (and I’m sure he saw me
looking at him). He lifted his head, stretched, jumped down from the branch,
and went off, walking down the river bed. I kept whispering to everyone to
“wake up! wake up! it’s a leopard!” but no one paid any attention. Back at
the camp, I fussed and fumed and swore I saw it, but no one believed me and
when it turned out that no one else had seen the big five – African buffalo,
African bush elephant, Leopard, Lion, and Rhino – I wasn’t allowed to claim
my honors! Pooh!Oh, well. Such is competition on holiday. All in good fun.On our Lake Nakuru Safari, we saw only the buffalo and the rhino and we
weren’t even trying for the big five (there are no elephants at Lake
Nakuru), so it wasn’t an issue.Then we came upon this lady lying in the grass. She wasn’t particularly
interested in us (ours wasn’t the only vehicle stopped on the road, since
someone else had spotted her some time before and by the time we got there
we were one of about six vehicles lined up along the way). As it turned out,
for some reason we were the closest (I think some of the others had just
heard she was there but didn’t know where to stop and look). So we watched
her for a while, and she gave us a few cursory glances and then, high and
mighty as you please, just got up and walked away.But not before we had had some excitement. In the car behind us was a group
of people who were obviously out to party. We had seen them at Makalia
Falls, and their radio was too jarring and they were really noisy, and
possibly a little drunk. Thankfully they pulled up quietly behind us when we
were stopped to look at the lioness and everything was just perfectly quiet
and still. Then suddenly we heard a car door open – not loudly – and one of
the men got out of the car, on the side of the road where the lion was in
the grass.Not done! Our guide had a heck of a time trying to get him back in his car
without raising her voice. It’s a criminal offense to get out of a car in a
national park (as in most countries where people go on safari) and this man
was clearly breaking the law. But when he saw the uniformed guide with us,
he did an about face (as it happens the guides wear the same uniforms as the
armed rangers, so he might have mistaken her for a ranger). He got back in
the car, slamming the door as he did so. And that’s when the lioness decided
to take a walk, so we were all convinced that it was his shutting the door
that made her leave.Not a pretty picture to think about, but this splendid lioness was worth the
stop.