As the photographs of the Skyline Drive and Blue Ridge Parkway indicate, America is a great country for what some refer to as a “motoring holiday,” and that’s exactly what I indulged in during the days surrounding the Fourth of July (America’s famous Independence Day). 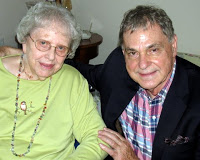 Travelling to Tennessee, it seemed to make sense to drive into the Virginia countryside where I grew up and call on two ladies who always meant a great deal to me. My first stop was in Salem, Virginia. Alma Austin Perdue, now 97 years old, was my mother’s first cousin and always referred to my mother as her best friend. A little younger than my mother, I can just see the two of them when they were children, with Mildred Austin, my mother, taking a “big-sister” role in Alma’s life. My mom was an orphan, having lost her mother at two years of age and her father nine years later, and Alma’s parents – her aunt and uncle – were often sort of surrogate parents for her, with their children, including Alma, being the brothers and sisters my mother never had.

So the relationship with Alma is very special to me. We correspond from time to time, and she is interested in all my various activities, and enjoys hearing stories from me about this or that adventure. And of course we have still many relatives in common, and we enjoy talking about all the people we’ve known over the years. It was a real pleasure to be with Alma for a visit, for we had not seen one another for many, many years (I believe the last visit about about ten or twelve years ago but I can’t be sure). So we had a lovely visit, and it made me very happy to be with this first-cousin-once-removed and share some family memories. 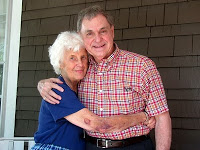 On up the road in Radford, Virginia, I was able to spend a day with Suzanne (always “Susie” to me) Ripley Goodykoontz, whose parents had been my own parents’ best friends at one point in their lives. Bud and Verna Ripley had several children – including three sons who all had illustrious military careers – and Susie was one of two daughters. An accomplished musician and teacher, Susie was a great influence in my musical development and gave me many opportunities to come to her house to sing while she played. Or simply to sit and speak about music, with her sharing her knowledge and expertise in amazing bursts of generosity and – not surprisingly – much fun and laughter as we would get tangled in some explanation that I couldn’t quite understand. It was all wonderfully enlightening and along with the musical education provided by another couple of childhood influences – now gone – engendered in me the love of music that seems to have characterized my life.

And of all the musical people I’ve known, Susie was probably the most eclectic, because anything that even remotely smacked of music interested her. Throughout her own long career she had great success in a great variety of roles: teaching music, playing in clubs, serving as a church organist, and – a passion we both shared – getting the best out of Broadway show tunes (we were both pretty excited by Cole Porter and never stopped singing and playing his songs together).

Now 82 years old, Susie and I had not seen one another for twelve years (although we try – when we can – to speak on the telephone but with my schedule that isn’t very often) and we had a grand old time catching up on long-lost friends and, yes, she sat at her grand piano and played for me to (attempt to) sing. It was a beautiful visit and one I’m very grateful to have had.

A wonderful vacation and, almost literally, a trip down the proverbial memory lane. Great fun.