Spring has come (finally) to New York and with it an event all of us are celebrating.Rodgers & Hammerstein’s The King and I has arrived with a full-scale revival, and there’s no better way to say it: this is one of the most beautiful stage productions ever to arrive in what many consider to true home of American theater.

The King and I opens tonight, and while I’m not qualified to make predictions in these sorts of things (I’m not a critic), we are happy we saw the show in one of the final previews. There wasn’t a seat to be had in the Vivian Beaumont Theater at Lincoln Center last Friday, and it’s my guess is that tickets for this great musical are going to be hard to come by once the box-office opens tomorrow morning. Perhaps the show will have an extended run, or be moved to Broadway (although I’m not sure I remember this sort of thing happening with Lincoln Center Theater productions). Whatever happens, we feel very privileged to have seen this remarkable revival.
What’s so good about it? It’s hard to begin. First of all, the production values for Lincoln Center Theater productions are extremely high (I’m remembering South Pacific from 2008-2010, and last year’s splendid Act One). That tradition continues with The King and I. Or, put it another way, the show is simply beautiful to look at: gorgeous stage settings, stunningly beautiful costumes, and a “take-away” stage picture that invites anyone who sees the show to remember a lovely evening that was totally focused on “Something Wonderful.” It’s no wonder that song is one of the great hits of The King and I. It’s all about – especially in this production – experiencing “Something Wonderful.”
In this connection, there is a thoughtful essay in the current issue of the Lincoln Center Theater Review (Spring, 2015). It’s an interview, with Anne Cattaneo speaking with Barlett Sher, the company’s resident director (and director of this production of The King and I), set designer Michael Yeargan, and costume designer Catherine Zuber. The title of the piece is “A Modern Twist” and once you’ve seen the production, you’ll recognize why that title was chosen.
The play has a long history – going back, of course, as far as The English Governess at the Siamese Court (1870) and its sequel Romance of the Harem (1873), both written by Anna Leonowens and combined into Margaret Landon’s Anna and the Kind of Siam, the source of the several versions of The King and I with which we are familiar today. As Todd Decker notes in his later essay in The LCT Review “…despite its glistening, tinkling, burnished presentation, The King and I resonates with a deeply American theme that occupies much of the work of Oscar Hammerstein II, the lyricist and librettist: the undeniable claims of human dignity.”
So that goal of providing a “modern twist” to this iconic story makes perfectly good sense, and in the interview, Sher, Yeargan, and Zuber make clear that even though (in my own take on the production) the opulence is there, it is also controlled. Here’s how they say it: “In this production, we have to try to strike a sparer tone that reflects something truthful about the inner life of the people rather than just putting them in big exotic clothes for a kind of dress parade or a gallery of exoticness.” No, this production of The King and I is not a gallery of exoticness (what a good phrase, that!). And it’s this attribute of the production that contributes so deeply to the overall beauty of this version.And there’s much more background, all coming together to inform us as we take our pleasure in this wonderful new experience: Margaret Landon’s 1944 novel followed by the 1946 film, then the earlier productions of the musical (especially the original, with Gertrude Lawrence and Yul Brynner all the way back in March 1951), the movie from 1956, and then the many later productions, all over the world. It’s no wonder we all love The King and I. 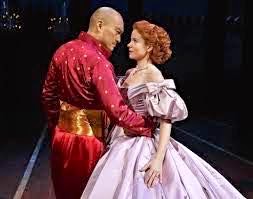 And what more of this new version? Of course the performers. Kelli O’Hara is a joy to watch as Mrs. Anna. For those of us who were at LCT back in 2008 O’Hara was a super Nellie Forbush in South Pacific. In last December’s The Merry Widow at the Metropolitan Opera she made – from my point of view, agreeing with Critic F. Paul Driscoll in Opera News – a “splendid” debut as Valencienne “singing, dancing and acting with authority and poise.” She brought the same professionalism and enthusiasm to Mrs. Anna in The King and I and immediately brought all the audience into her performance when she and Jack Lucas, as Louis, her young son, opened the show with “I Whistle a Happy Tune.”

Ken Watanabe, who plays the King, is also extremely winning in his performance. Of course I did not know of his work (this is his LCT and American stage debut, but there’s no question – from reviewing his Japanese theatre credits – that this is a talent we’re lucky to see brought to our stages).

Others are excellent in their performances. Naturally there are far too many to list here, and we can see why. Sher describes the production as “huge” and I suppose that’s the only word for it: “Fifty-one people are in it, plus twenty-nine in the orchestra, and only a place like Lincoln Center Theater can kind of pull this off. … It’s like having one foot in the past as deeply as we can, one foot in the present, and our eyes looking out as far as we can see.”

And there’s no way to get around it (not that we would want to): it’s the music. We’ve been humming and singing these tunes all our lives, and I can attest to the fact that many of us in the audience at the Vivian Beaumont Theater were hard pressed not to sing along when the orchestra struck up the overture. What a remarkable score!So if you’re a New Yorker (or visiting New York anytime soon), make it your business to take in The King and I. You won’t regret it. For me it was a very special experience and at the curtain calls it turned into a totally un-New York experience when I found myself in a standing ovation, joining almost everyone else in the theater. In the many years I’ve lived in New York, this was one of the few times this has ever happened; it’s something we New Yorkers just don’t do very much. On this occasion, there was no choice. It was spontaneous and it was totally appropriate.
We won’t forget this beautiful evening. And just like Anna when she sings about her life with Tom, we join her – in quite a different context – as she sings “All of my memories are happy tonight.”