People in other countries are often impressed with the American holiday of Thanksgiving, to be observed this year on Thursday, November 25. 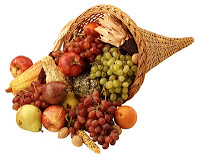 This annual tribute, in gratitude for the bounty of the land, is one of America’s great traditions. This sort of grateful acknowledgement of  the “good things in life,” so to speak, began for Americans with the first colonists, in Massachusetts back in the 17th century (although some credit its source to the Virginia colonists in the same period).

Thanksgiving is not limited to the United States (Canada’s observance comes to mind), but in the States the day is given special recognition by many citizens. Observance of the holiday usually focuses on a special meal with family and friends, with some participants often travelling far to be part of the group. For many people in the States, the holiday has a special meaning because it introduces our end-of-the-year holiday season, and we all find (or try to find) ourselves in a mood that lifts us a little above the mundane and the ordinary for a few weeks.

This year I’m taking a cue from WQXR, New York’s classical music radio station, which is running for the second year something called “The Gratitude Project,” inviting listeners to identify the music they’re most grateful for, which is then playing on air. For readers of this blog, I’m suggesting “The Thanksgiving Project,” only let’s do it with a little different twist. Let’s share what we are grateful for as 2010 begins to come to an end.

It doesn’t matter what it is, but we would be very interested in hearing from you. Share something for which you’re grateful. Just submit a comment below and tell us what you are thankful for. Perhaps it’s someone in your life who is special to you, or an event that got you to thinking differently, an unexpected windfall of some sort (or better yet, some tragedy or sadness avoided), or something simple that you’re just happy is part of your life, such as the good music you hear, your friendships, or your success in your profession or work.

Send a few words to The Thanksgiving Project. We’ll share them on Thursday.