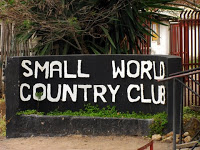 When we’re able to get together, the Great Four (or Three or Two or however many of us are about) like to have Sunday lunch out.

African restaurants are of great interest to me. The “culture” – you might say – of eating out is a little different in Kenya than in Western countries. For one thing, not as many people do it. I’ve been told that in America as much as 65% or so of our food expenditures is spent on eating out. That is definitely not the case here, and I would suspect just about anywhere in Africa.

And what we would call “middle class”-type restaurants are very nice and, oddly, often not very crowded (and sometimes – as here – just plain empty). There’s another group of restaurants, too, what we would think of as the “high-end” restaurants, catering to the muzungu crowd and the well-to-do, but this kind of place – spotted on the road as we drive along – is more our style.

Despite the name, this one is not a country club at all, in our sense of the phrase. The Small World Country Club (photos at Africa – Sunday Lunch) turned out to be a very pleasant stop on our Machakos sojourn. Good food, pleasant surroundings (very beautiful and well cared-for) plantings, even a rabbit hutch right in the middle of the tables but, alas, no rabbit on the menu.

And as I’ve discovered, when one travels, connecting with local art forms is sometimes not as simple as it looks. Could not quite make out what was going on with these two pieces of sculpture. Certainly not pretty, not representational, so I don’t know. I suppose I could revert to the old tried-and-true “hmmm. very interesting.” But worth a photo or two for a reminder later on.