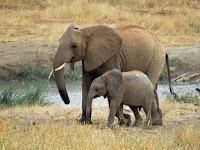 Friends and colleagues know that among Mr. Guy’s favorite things in life (aside from his family, it goes without saying), elephants rank high up there, probably the result of his thrilling experiences living in Kenya and spending as much time as he could going off with his driver Charles to look for elephants. [More about that in the posts noted to the left, dating from late 2009 to early 2011, with one dating from January, 2014.]

No need to go into a lot of description here except to note that in Africa, according to the World Wildlife Fund, the splendid African elephant comes in two sub-species, the Savannah (or bush) elephant and the Forest elephant. I love them all, and I’ve decided that — for a gentle re-entry back into the world of “Sharing Guy’s Journey” — I’ll share a few elephant-related thoughts for those who join with me in thinking about this magnificent animal (which the WWF refers to as “the largest animal walking the Earth).

And a little later I’ll get to telling some sweet stories to top up part of what I’ve told earlier (and encouraging anyone reading this to look back at my favorite elephant story about the old-lady elephant who came to mean so much to me).

But first I want to tackle a problem that seems to keep coming back. Despite a certain tendency toward some level of optimism over the last couple of decades or so, the news about elephant poaching continues to be bad. I’m not sure what’s going on, but there is surely some lack of motivation, probably having to do with the times we’re living in. We have the international situation with Syria and terrorism news from all over the world. Then there’s the attention given to attempting to deal with some version of post-Brexit governance and in the United States we have distractions of what purports to be a political campaign. 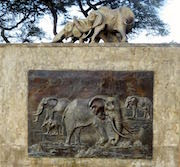 So is it any wonder that this particular subject — which worries so many of us — is “out-of-bounds” for most media? Certainly we were all pleased to read about President Uhuru Kenyatta of Kenya repeating a poached-ivory burning ceremony originally performed in 1989, with an impressive monument later built to commemorate Kenya’s President (at the time) Daniel arap Moi’s burning of some 12 tons of elephant tusks. The monument (shown here) is a popular tourist site within Nairobi National Park, attracting visitors at all times of the year. And the poached-ivory burning ceremony was an action that seemed to have given new attention to changing global policy on exporting ivory. So this past April 30 President Kenyatta oversaw a similar ceremony, which National Geographic described as the destruction of 105 tons of elephant ivory and 1.35 tons of rhino horn, “the final remains,” the National Geographic news service reported, “of some 6,500 elephants and 450 rhinos killed for their tusks and horns.” 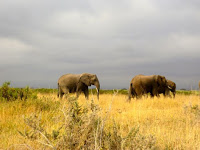 That’s a very noble response to what is an amazing — in the literal sense of the word — endangered species destruction. But it is also troubling to think that an additional 105 tons of illegal ivory was confiscated between 1989 and 2016. To my way of thinking, it is almost inconceivable that as our society becomes more and more civilized (as we hope is happening) such damage occurs. I recently heard from a good friend who follows these things with more scholarly (and personal) background than I, that Avaaz — an apparently well-known global civic campaigning community — reports that “Every 15 minutes an elephant is brutally slaughtered for its tusks, and at this rate they will be gone forever in just a few years.” The report from Avaaz goes on to state that “momentum is growing for a complete global ban on ivory” but notes sadly that the European Commission in a position paper released last month (according to The Guardian) has indicated that “rather than an all-encompassing ban it would be better to encourage countries with growing elephant numbers to ‘sustainably manage’ their populations.”

Doesn’t this seem like an odd response to a problem that is clearly recognized throughout many countries? Over the past couple of years, The New York Times has been running a very informative series of articles about elephant poaching and the dangers of extinction for this remarkable species (just search “elephant poaching” in The New York Times). I think all civilized peoples recognize that the elephant-poaching crisis is heartbreaking. Some 29 African governments have predicted mass extinction within 25 years unless a full-scale ban on any future domestic ivory trade is enacted. What possible reasons could there be — other than greed — to oppose a ban on the sale of ivory?
These are questions I’m not qualified to answer but that does not mean I don’t think about them. And as I spend a little more time thinking about elephants in future blog posts (happier stories I promise) this sad situation has to be kept in mind. It was aviatrix Beryl Markham, in West with the Night, who provides us with a closing thought for today for this subject:

“It is absurd for a man to kill an elephant. It is not brutal, it is not heroic, and certainly it is not easy; it is just one of those preposterous things that men do….”