A Polish Christmas Party in Nairobi

Stay with me here. The Nairobi experience continues, but all the connections get a little sticky with this one, and I’m not sure just as “Nairobi-esque” this particular experience was, or how it fits into the “Guy-in-Kenya” saga.

Nevertheless, it was fun, and perhaps it’s a tale worth telling.

Two good Nairobi friends of mine – he is a biochemist from Poland and she is a native of Kenya, a businessperson and television producer – invited me to join them for the afternoon (and evening) at the Apostolic Nunciature (the equivalent of the Vatican’s Embassy in Kenya). The Apostolic Nuncio – the head of the mission – also serves coincidentally as the Vatican’s Permanent Observer of the U.N. Human Settlements Programme (UN-HABITAT), which I thought was a nice touch.

We were invited to the mission for the annual Christmas celebration of the Polish community in Nairobi. My friends had came to Nairobi from London – where they had lived for several years – not long before I came to Kenya, and we seem to have been drawn to each other, a situation I like very much. We are having a good time sharing experiences, and we keep finding interesting things to do and interesting people to meet.

Because of their earlier connections with Kenya and their many visits, my friends naturally have much more background in Kenya, and I find that not only are they somehow linked in with the Polish community in Nairobi (approximately 150 people or so, I’ve been told) but through that, there is some involvement with the Apostolic Nunciature as well. 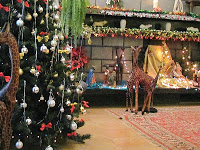 Good connections indeed, but I had a little trouble keeping it all straight in my head, but I’m nevertheess not about to decline when I’m invited to accompany them to such a splendid Christmas gathering. Probably the only American in the crowd, I had a lovely time, met very interesting people, and, not surprisingly, got my fill of Polish Christmas food. The grounds of the nunciature (if that’s how you describe the mission) was beautifully decorated for the holidays. There was, not surprisingly, a splendid tree and the huge fireplace opening served as the backdrop for a very elegant and elaborate holiday crèche (although, truth to tell, this was the first manger scene I’ve ever seen that had giraffes in attendance, and this one had many!).

As I say, it was a grand party, with everyone dressed to the nines. The crowd was a nice mixture of clergy, nuns, and members of several monastic orders or – if they were all of one order – wearing different types of religious habits. The nuns were Sisters of the Holy Family and I was given to understand that it was they who had cooked all the food and arranged the decorations (and they did a mighty fine job of it, too). A wide range of non-clergy were present, too, and not just members (and former members) of Nairobi’s Polish community.

Of course there were plenty of children, but not too many. Still, there were enough for me to get to play “Granddad Guy” a couple of times, and when it came time to participate in the little ceremony of sharing the bread – a Polish tradition for wishing each other a Happy Christmas – it was fun to see their faces when this strange American (me) spoke with them. Most of the children – especially the Kenyan children – seemed delighted to have someone from somewhere else wish them a Happy Christmas. And some of them seemed a little sad that we Americans don’t have giraffes visiting the Christ Child in our manger scenes.

While some of the opening greetings and reading in the ceremony were lost on me, of course, because they were in Polish, I was delighted to hear the Apostolic Nuncio, Archbishop Alain Paul Charles Lebeaupin, welcome the guests in English. The Archibishop conveyed his greetings and then made an announcement that obviously meant a great deal to him and to everyone at the party. Noting that the house where we were meeting had received Pope John Paul II on three separate occasions, he announced that just this morning Pope Benedict XVI had signed a decree to put into motion a procedure for his predecessor’s beatification.

Archbishop Lebeaupin also announced that Pope Benedict had also approved this morning morning the beatification of Father Jerzy Popieluszko, the “Solidarity chaplain” who was murdered by the Polish secret service in 1984. Needless to say, the crowd was overjoyed with the news, and it was a great thrill to be with them as the announcement was made and to share in their applause and their pride.

When it came time for Polish Ambassador Anna M. Grupinska to speak, she gave special emphasis to the joy of the celebration and the role of tradition in Polish families, particularly at Christmas. She also spoke with obvious pride in recognition of the news the Cardinal had conveyed and she shared her own delight that this celebration was being held on the day when the Vatican announcements – so special to the Polish people – were being made. To conclude the formalities, Ambassador Grupinska distributed gifts to everyone, fancy wrapped presents for all the dignitaries and pretty red hand-carved soapstone hearts – another Polish Christmastime tradition – for all the guests. It was a very kind – and memorable – gesture on her part, and gave the Ambassador the opportunity to speak and shake hands with everyone present. Very nice indeed.

The grounds of the nunciature are beautifully laid out, and the flowers, shrubs, trees, and other plantings – including two very pretty grottos – are a delight to the eye. I had a fine time strolling about with my friends, and when we all moved to the large terrace for a sumptuous meal of Polish Christmas foods, some of us, I fear, enjoyed ourselves perhaps a little too much and ate perhaps a tad more than we should have (but it was so-o-o good). Then the caroling began, and while I can’t say I sang along – Polish is definitely not one of my languages and certainly many of the carols were songs I had never heard before – the sweetness of the moment could not be denied. This was “community” on a grand scale. It was beginning to feel like – for me – this really is an international Christmas after all.