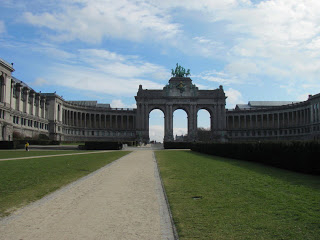 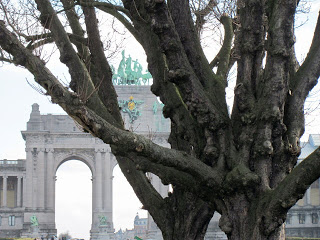 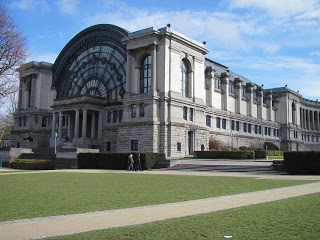 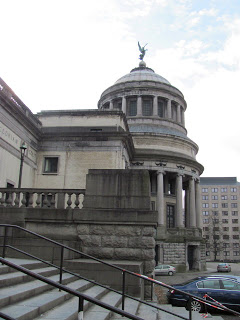 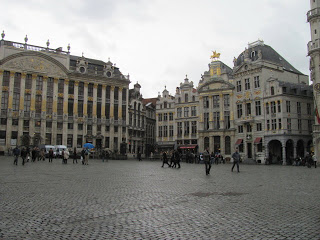 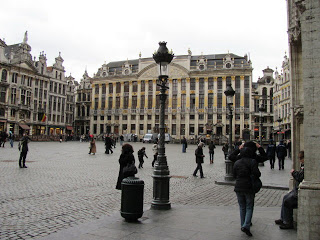 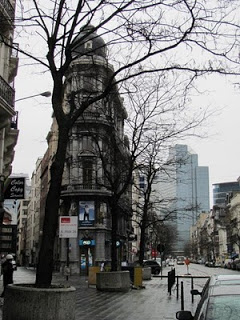 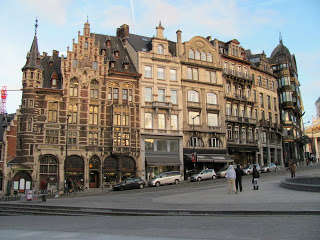 There’s no question but that Brussels is a very photogenic city, and this
amateur photographer enjoying his new hobby had many delightful moments.
Like most visitors from America, I often wonder – as I stroll about cities
like Berlin, Vienna, Paris, and of course London, what it must be like to
have such “monumental” open spaces within the city. We have our Central Park of course, and many other American cities have
grand public parks, but somehow in these European parts I always have the
feeling that the combination of space and massive monumental architecture
adds a separate dimension to the experience. And what must it be like to be
an ordinary citizen and just have all this available to you, anytime you
want to wander in and out? How lovely!That lead-in is to introduce my pictures of the Royal Museums in Brussels,
located in the Parc du Cinquantenaire. These are massive structures, and I’m
sorry I couldn’t be in Brussels long enough to explore the whys and
wherefors of that massive pile with its huge window facing the park. Is it a
meeting hall? A open museum? I couldn’t find out, but if the interior is
anything like the exterior, it is, no question about it, a “grand” space. If
it were located closer to the City Center, I would think it was a railroad
station but, no, that can’t be. Not in a park.And what trip to Brussels could not include a few pictures of the Grand
Place? All these odd buildings, each so lavishly and uniquely decorated. And
there are advantages in a winter visit, because like the Piazza San Marco in
Venice, once the visitors start coming in with their holiday excursions,
Grand Place will be just one big crowd and I don’t think I would like that. My friend and I enjoyed the Brussels version of New York’s Flatiron Building
(and I seem to recall seeing these I lots of other cities, where two streets
come together at an angle). This one – for some reason – was particularly
interesting to me. As was the wall of houses climbing up Mont des Arts,
culminating in one of the most famous art nouveau buildings in the city
(yes, I would conclude with art nouveau, wouldn’t I?). The big black
building on the right with the highly decorated wrought iron is the Old
England Department Store, built in 1899 with Paul Saintenoy as its
architect. Now the city’s museum of musical instruments, the building has
been preserved as one of the great examples of art nouveau architecture.