It is probably not very kind to describe one’s impressions of Rio de Janeiro so soon after the awful disaster of the flooding of last week, especially if those impressions are not altogether positive.
But I’ll forge ahead and hope my friends won’t think me callous if I share a few thoughts based on what was probably too brief a time in this fabled city.
In connection with my current assignment with the United Nations Human Settlements Program (UN-HABITAT), I was asked to attend the World Urban Forum, a huge event held every second year and one of the most important gatherings of people affiliated with the entire larger subject of sustainable urbanization. My task is to work with UN-HABITAT’s KM team to devise a knowledge strategy for the organization, and coming to this meeting fit right into my work. What better opportunity to drill deep than at such a gathering of world leaders, academics, donors, NGOs, and many other thousands of people who would be coming together in Rio to network about this important issue?

And the work was superb, and since this is my personal blog, I won’t go into detail about the excellence of the conference and the continuing high quality of the presentations, meetings, focus groups, knowledge networking opportunities, and all those other elements that lure us to professional conferences. It was a privilege to be amongst such dedicated and knowledgeable people – all willing to speak freely and frankly about the subject of sustainable urbanization – and the consultancy assignment was considerably enhanced by being able to meet with and interact with so many leaders in the field (a brief description is at the SMR blog and the official World Urban Forum site has much information about the conference).

Rio de Janeiro? Well, as I say, it is a fabled city, and certainly Ginger Rogers and Fred Astaire have a lot to answer for, since for many folks “Flying Down to Rio” is their early introduction to the city. And wasn’t there some sort of Rita Hayworth connection back when we were going to the movies to indulge our fantasies about exotic places?
No matter. 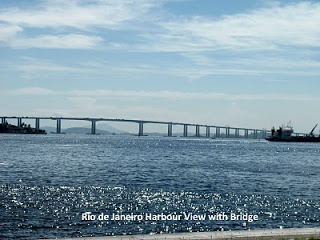 Rio’s not like that now. For Mr. Guy, it was an extremely unusual business trip. For one thing, I had not reckoned on the heat. How all those business executives (and security guards) manage in their black suits all day long is a mystery to me. I showed up the first day in my usual management consultant’s suit-and-tie and found myself immediately drenched to the skin.

After nearly fainting from the 40-degree heat (that’s C – about 100 degrees F, I believe!) – and thank you Anonymous Security Guard for taking care of me and finding me some water) – I fortunately discovered that the UN-HABITAT stand was selling t-shirts and some of them fit me nicely, so I quickly became the agency’s most enthusiastic t-shirt model….
The conference venue was on the other side of the city from the Copacabana, the beach area, and while the delegates were housed in lovely resort hotels across the wide boulevard from the beach (which is – by anybody’s standards – simply spectacular in its beauty), it was an unwise visitor who walked about outdoors. The combination of warnings about not walking about alone (even in the daytime hours) and the heat simply made it practical to limit one’s hotel egress to the open door of the waiting taxi (bless the hotel
staff for their excellent service in this regard).
The journey to the conference venue took about 25-35 minutes, and it was interesting to observe the streets as you rode along. The city is obviously in the grips of a financial depression, and the millions of citizens living in the slums are testament to the concept that if something isn’t done about the world’s cities, society is going to be in a terrible fix, sooner rather than later.

The signs are everywhere. Rio is not a clean city, and it is surprising after being in other large cities to see the extent of dirt, leftover construction materials, and falling-down construction sites and deserted structures just littering the place up. Graffiti is everywhere, simply everywhere, and to think about what’s happening to the city as you ride along (admittedly in your air-conditioned taxi, safe from having to be part of the rough edges of city life) is to realize that if something is not done to reduce the inequality in urban society, it’s just hard to tell what the future is going to be like.

The distant conference venue was (despite the bleakness of other parts of the city) an example of how a major city is trying to do what it can. All along the harbor are these huge warehouse, left over I suppose from the great days of commercial shipping and probably dating – one would guess – from in the early part of the last century. Deserted for a long time, the warehouses are now part of Rio de Janeiro’s campaign to “re-birth” itself and to that end, a massive effort has been put into turning the six long warehouses – stretched out along the harborside – into a world-class convention center. It’s not there yet, but the signs are there, and given a few more years, a collection of innovative

and enthusiastic architects and designers, and a few million (billion?) dollars, this could be one of the great conference venues of the world. 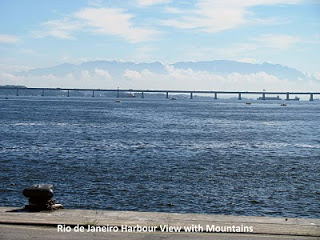 So despite the heat and the sad prospect of what could be seen in other neighborhoods, the beauty of the harbor is readily apparent (and the harbor was the subject of the only photographs I was able to take, beyond some taken at the conference itself – plenty of other images of Rio de Janeiro are available particularly here).

The conference was hosted by the Brazilian government, and it was obvious the country’s and the city’s leaders were very pleased to be able to offer Brazilian hospitality to conference attendees, and we were all thankful to them – and to UN-HABITAT’s conference planners – for doing such a fine job.