Having been acquainted over the years with tour operators, I’ve become accustomed (and indeed have come to expect) that as any particular travel activity begins to wind down, it is customary to schedule a special event – most often around a meal – and it’s known as the “farewell” luncheon or dinner. 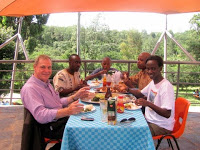 Not be outdone, my best friends and I had our Farewell Luncheon at Bomas of Kenya, where there is such a splendid arrangement of buildings and grounds, all on a large variety of levels, some indoors, some outside, and even quite a few on the lawn. And, yes, there are some unexpected occurrences (unexpected, that is for the Westerner), things like the wandering warthogs that come up on the grass, getting very close to the guests.

Or the ubiquitous cats – almost always found at Kenyan restaurants where there is an outdoor dining space – who wander about expecting a handout from the guests and, in some cases, if the handout isn’t forthcoming, can be a little aggressive.

We weren’t too harassed, though. For one reason, we chose not to sit on the lawn, so the warthogs weren’t a problem for us. And the cats? Well, one learns to push them away, and eventually they get the idea.

The photographs at A Temporary Good-By: Our Farewell Luncheon give a pretty good idea of the fun we were having. We had already exchanged gifts on other occasions, and I wasn’t expecting gifts, but my pals went all out. Using a wonderful photograph of Charles, Nerisa, and Geoffrey and having it printed on not one but two tee-shirts, I can now wander about the streets of New York with the three of them on my chest, clearly identified as “Guy’s Friends Kenya.”