One of the big attractions at the Bomas of Kenya is the spectacular dance programme, and it’s hard to convey, in just a few photographs (which you can see at Dances Based on Native Dances of Kenya), the excitement and the enthusiasm of the dancers in this show. 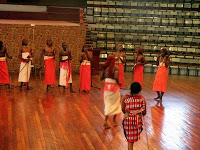 For one thing, it’s in a huge space, and it’s a little daunting to be there right now, in the tourist off-season, because this great hall, which seats some 2,000 people, had only a couple of hundred spectators (hence the many empty seats in the photos).

Not that the lack of a sizable audience was any deterrent to the dancers. They were there to put on a show and they’re all serious professionals, so the smiles were right there, the jumps were all as high as they could be (they couldn’t have been any higher!), and their enthusiasm for the performance was thrilling for us in the audience).

But one can’t help but wonder what the enthusiasm level might be with a full house!

I couldn’t follow the structure of the show (the narration – in English – was just hard to understand, since there was a great echo from the speakers) but I gather it was supposed to depict the kind of dancing done by tribes in different regions of the country. I did get that the first number was based on dances at the coast, which would make sense since the men wore the fez-like hats. The style was almost always native-focused, but it was apparent that some serious choreography had been employed – and very well done at that. So the dancing just kept moving, and I began to wonder just where the dancers get all their energy. I was able to figure it out, though, as we moved into the second act, for I began to realize that there seemed to be two groups of dancers, which made a lot of sense, since they were moving so much and with so much energy when they were on stage. They would obviously have to spell one another.

Highlights? Far too many to try to list here, but the second group – they guys with the long wooden drums – were pretty spectacular. And one can’t say enough about the acrobats in the second act. Breath-taking, spectacular, mind-boggling – all those adjectives that come into play when one is watch a really talented grup of acrobats! Just fabulous. The native dances and dancers at the Bomas of Kenya should be on every visitor’s list of things to see.