The remainder of the day was to be at the Bomas of Kenya, a treasured exploration of Kenya life and the history of Kenya. Our day there was in three parts, a visit to the actual bomas (a Swahili term which means something like “native homestead”), our “farewell” luncheon, and a performance at the Bomas of Kenya where we were to see dances from the different sections of Kenya. 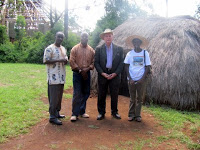 Our first visit was to the actual bomas (don’t know what the plural might be). This is a large section of the park in which replicas of the different types of homesteads or compounds have been built, demonstrating the various types of architecture used over the centuries by the African peoples in building there homes. There are 42 tribes in Kenya, and all sorts of “mixtures” (one might say) of the 42 tribes, so for a Westerner it is not easy to keep track of it all. And indeed most of us don’t even try. The whole process gets ‘way too complicated.

And that is sort of what happened to us on Sunday, because after we had visited several of the villages (or compounds, for each represents a single man’s compound where he would live with his family, his several wives, and his elderly parents and, I suppose, any other members of his version of what we might refer to our “extended family”), our stomachs told us we would not be able to make it through all 42 villages (if indeed there is one for each tribe). So after we had visited the villages that reflected the heritage of each of my pals, we pretty much decided that we needed to move on to lunch.

Nerisa, who had visited Bomas of Kenya before (none of the rest of us had), served as our guide, and we had great fun going in and out of the houses (sometimes called “huts” even in the signpostings and, truth to tell, after our experience in the Maasai manyatta, it was clear that many of these are in fact very small shelters). Others, however (often the “1st Wife’s Hut”) were pretty sizable and apparently designed to be used as a sort of meeting place for gatherings of the members of the compound.

Not many pictures, but if you go to Visiting the Villages at the Bomas of Kenya you can get an idea of the good time we were having!