Welcome – the concept – is the theme of this post. The trip from Rome was long (9+ hours, with a too-fast transfer in Zurich) but was considerably eased by being a daytime trip instead of a night flight.

So there were good opportunities for just relaxing and being quiet.

And for reading. I enjoyed Bill Bryson’s sweet African Diary, in which he recorded some of his experiences travelling with a crew from CARE. And I undertook the beginnings of John le Carre’s The Constant Gardener, which would have been completed if I had not been so comfortable I ended up having more naps than I really needed!

I am much looking forward to the continuation of this fascinating saga! A real page-turner.

Now about that welcome. Once in Nairobi and having left the aircraft, everywhere I turned there were welcoming smiles, and the people at the airport – both those processing incoming passengers and the people waiting for the passengers – were all very kind and generous with their time and seemed to be very happy to see us. And the best of all was my driver, there to greet me and see that I got home safely and securely. He made it clear that he was genuinely glad to see me.

The greetings at the workplace, too, were mighty close to effusive, not only among professional colleagues (who include many local people, or professionals from somewhere else in Kenya) but from the general group of workers with whom I interacted on a regular basis in the short time I was in Nairobi before I went to Italy. It was nice to be made to feel so at home in a professional situation.

And that brings me to why I want to say something about the concept of welcome. There seems to be a natural instinct in the people I’m meeting these days to be welcoming, to make one feel at home, relaxed, and ready to enter into dealings that seem built on a sense of shared good thoughts about each other. I’m not sure I can articulate very well what I’m experiencing in this remarkable place, but what I am finding is that people seem to be going out of their way to make me feel that they are happy that I am here.

I am also surprised – based on some of the messages and comments from some of my friends elsewhere in the world – that so little of this attribute of Kenya is known to people in other places. Yes, I know there are the security issues – as there are going to be in any big city where so much of the population is poorer than even the poorest American can imagine – and over the last couple of decades things have been very bad at times. But, as a colleague made clear to me in a conversation yesterday, Kenya has become – or is trying to become – a modern country. I asked him what he meant by “modern,” and he pointed out that with the massive amounts of communication available, things like television, online interactions, etc.), the good educations people are getting (even if they cannot get work after they have their education) and all the interaction going on between the people of so many countries coming here, the local population realizes that no matter how bad things get for them individually they do themselves and their country great harm by engaging in lawless activities.

Is that too simplistic? I don’t know. All I do know is that I meet very friendly people as I walk to work in the morning. I have about a 35-minute walk, along beautiful streets and, yes, the houses on those streets are well protected, many with a man standing watch at the gate, either inside the gate or on the street in front of it. But each of these people greets me, especially if I look at them and simply smile as I walk past. And, yes, my walk takes me past the U.S. Embassy, where the guards have now gotten to know me and greet me before I can greet them, so I recognized that where I live is perhaps not a typical neighborhood but I don’t think that explains entirely the welcoming interactions I’m having with people in Nairobi. 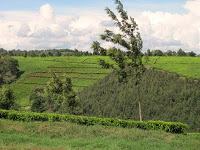 So to test my impressions about all this, about the – you might say – “welcoming state of mind” (and to give me the opportunity to see a different part of Kenya), I decided to go out into the countryside, away from the city, just to see what I could see. First of all, of course, was the spectacular scenery (here’s one view and that’s tea you see growing up the hill behind the tree). Many, many people have written about how beautiful Kenya is, and they have all been right. We drove up into the hills where the coffee and tea plantations are, so many farms, and I saw scenery that looked like it had just dropped out of some fantasy about country life. And a sky and clouds that – were they not real – could have been painted by John Constable.

And the people? The welcoming? Absolutely. And most noticeably in Limuru, a moderately sized city – perhaps just a good-size town – that was full of people, all moving about, all on their way to or from somewhere.

We stopped to do a little shopping and I was amazed to see the greetings we were given. Not because I was a white man (the concept of racism and prejudice based on skin color is not known in Kenya) but because the people in the shop – customers and clients alike – were just nice, friendly people out in the town, going about their business.

And as a little aside, despite the fact that I was not the same color as everyone else in the store there was no attempt to charge me Muzungu prices (which, if I’ve got it right, means something like “white man’s prices”). I’m still working this one out (and I might not be spelling the word right), but apparently in some parts of Kenya there are or have been special – higher – prices for whites, an scheme that seems to have sprung up in colonial times. I’ve not experienced it since I’ve been in Kenya, but in Limuru I was not only not charged a higher price, but the shoes I purchased – already about 30% cheaper than at the Village Market, the shopping center near my house in Nairobi – had an extra 15% knocked off at the cash register. Why? Because the factory where they are made – employing a goodly percentage of the town’s population – is just about 100 meters up the road from the store!

How’s that for a very tangible welcome?

I will admit that as we drove along – when we left the countryside and meandered into some of the more populated areas – there were some gloomy scenes along the way, primarily because I’m accustomed to business districts in villages and communities in America that are all tidied up and neat and polished. That is not the case in some of the places we drove through today. In many places, the road we were on was the main street (the only street) of the town and there were plenty of shops that were nothing more than lean-tos or sheds or what looked to me like pretty flimsy buildings propped up on cement blocks.

But not always. In other communities there were plenty of nice, recently constructed buildings, with what looked like very nice flats. And, as it turned out, as we approached the city on our return, we visited the town where my driver and his family live, not that far from the part of the city where I live in Nairobi. He told me all about his town, and pointed out people he knew, and I got the feeling that the idea of welcome and friendliness is just as evident in his town as in the other places I’ve visited. Quite frankly, if it’s appropriate, I might one day ask him to take me back to his town, just so I can walk around with him and get to know some of the people he knows. I’m sure I’ll be made to feel welcome.